Zomato Makes Opting Out of Cutleries While Ordering Food the Default Option, Aims to Reduce Plastic Use 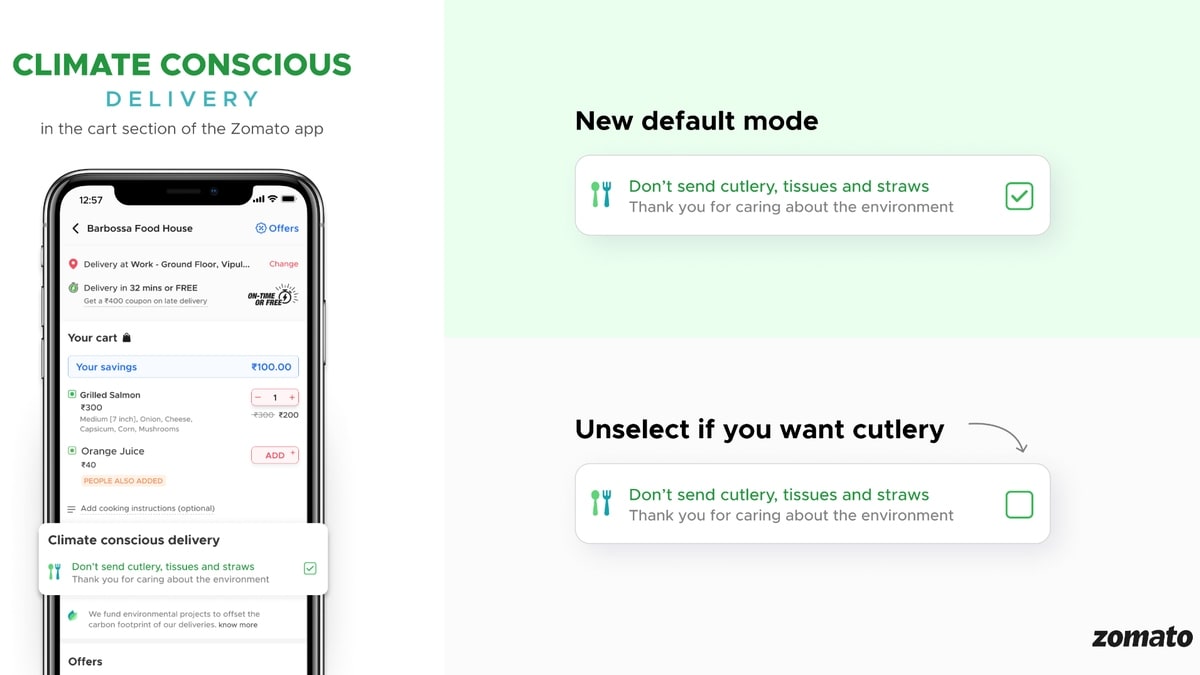 Zomato has announced an update for its app where it will change the default settings for the cutlery option. Users will now have to opt-in to get cutlery — spoons, forks, tissues, and straws — instead of opting out like earlier. The food delivery service has said that it will ensure its restaurant partners also adhere to its initiative to reduce the use of single-use plastic while delivering orders. Zomato also recently announced a new tier for its premium membership — Zomato Pro Plus.

Announcing the update via a blog post, Zomato mentioned that after surveying many of its customers, they found that “more than 90 percent of them said that they didn’t really need plastic cutlery with their orders.” Due to this, the food delivery service has changed the default setting for adding cutlery to orders. This will help save up to 5,000 kilograms of plastic every day, which accounts for nearly 2 million kilograms of plastic in a year.

This small change can help save up to 5,000 kilos of plastic in a day. If you can, please say no to cutlery and do your bit. Read more here –https://t.co/shxCvs7pHE

The food delivery service also mentioned that it would take feedback from its customers regarding the plastic being delivered. Customers will be given the post-delivery prompt that will ask — Did the restaurant send you cutlery? Here, customers can let Zomato know if the restaurant they ordered from delivered cutlery if they didn’t ask for it and vice-versa.

Zomato has mentioned that the update has already rolled out to half of its customers and the rest will receive the update in the next three to four weeks.

Earlier this month, Zomato announced a new tier for its premium membership — Zomato Pro Plus. The new tier will include all benefits from Zomato Pro along with some additional benefits in the form of unlimited free deliveries, no surge fee, and no distance fee. However, the Zomato Pro Plus membership is currently available via an invite-only method. The regular Zomato Pro membership costs Rs. 200 for 90 days and offers benefits such as 30 percent extra off on food deliveries, up to 40 percent off on dining experiences, and faster delivery.

Who Holds DOGE? 82 Percent of Total Dogecoin Is Being Held On-Chain by Only 535 Entities, Analysis Shows