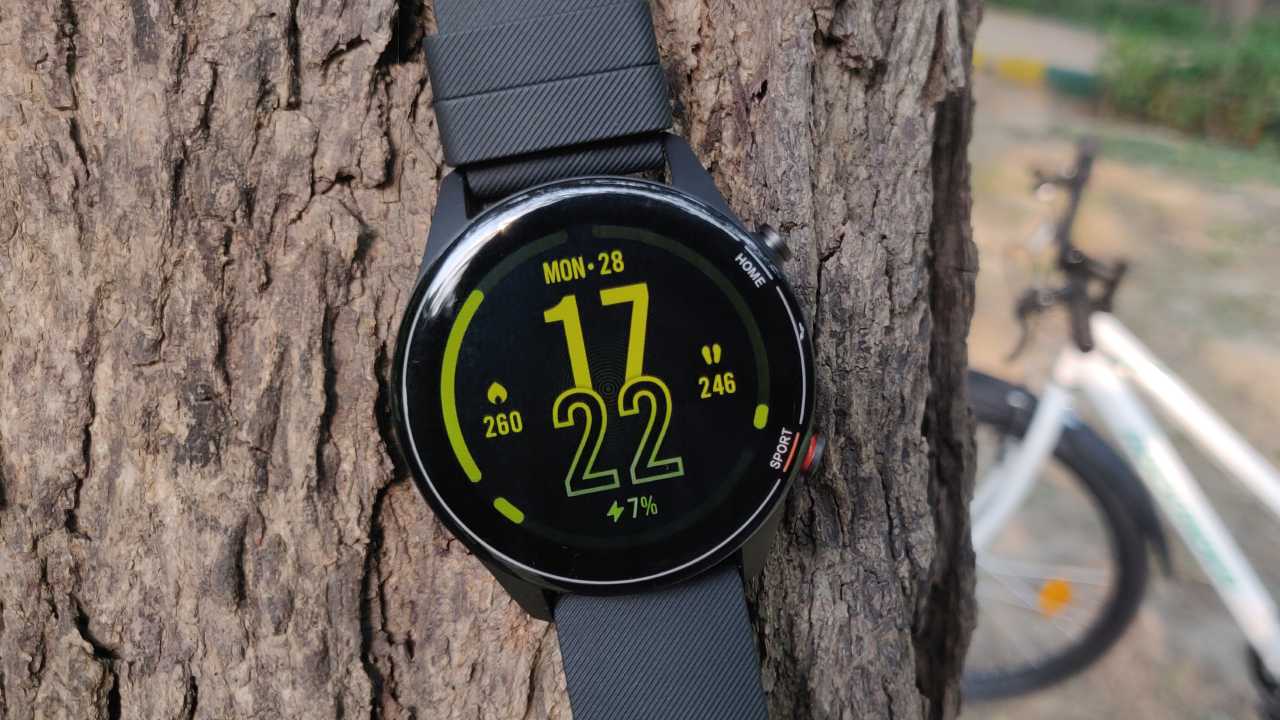 Xiaomi is no stranger to wearables. In fact, one might safely say that the Xiaomi Mi Band 5 is still one of the best sub-Rs 5,000 wearables on the market. The reason for Xiaomi’s success is the same all through its lineup. Feature rich products, at a very reasonable price. We saw this in action a few months back when the company launched the Mi Revolve, a feature-packed wearable. You can check out more about that in our complete review of the device here. Now though, the company has launched a new version of the device, the Mi Revolve Active. We’ve been using the device for a while now and here’s what we think of it.

The Xiaomi Mi Watch Revolve Active is not much different from the standard version of the wearable device. So you get a 1.39-inch AMOLED dial and metal case. On the right side are two buttons, ‘Home’ and ‘Sport’. The rear panel is made from plastic and features optical sensors as well as charging points. The straps are made from Silicon and are interchangeable, which is always a good thing as it allows users to replace them if they are damaged.

The Mi Watch Revolve Active is also said to be waterproof up to 5ATM. While we were unable to test this to its limit, I did dunk the device in a bucket of water and it works without any issues.

The overall build of the wearable is pretty good. It feels nice and solid. I accidentally bumped the watch against a wall a couple of times and there is nothing much to report. However, it should be noted that while a large display is nice to look at, it does have issues. The size may make it ideal for those with very small wrists as it may make it look a bit ungainly. Further, the size does make it tough to wear while sleeping. This can be a bit of an issue for those looking for a wearable with SpO2 tracking for sleep apnea.

As mentioned earlier, the display of the Mi Watch Revolve Active is quite big at 1.39-inches. While this does make it look ungainly on a small wrist, the plus side is that it makes it easier to read. The display is nice and bright, which makes it easier to read in bright sunlight. The AMOLED panel offers nice punchy colours, while the response rate is excellent. Swiping and other gestures were quite smooth. The wearable comes with four pre-loaded watch faces, while the user does have the option of downloading more via the Xiaomi Wear app.

The UI is also pretty straightforward. Swipe down to access notifications, while swiping up gives you quick access to settings and actions. Swiping left or right lets you scroll through widgets such as heart rate, stress levels, sleep, weather, and more. Users can rearrange the order of these widgets or hide them via the Xiaomi Wear app as well. The list of workouts can be accessed via the ‘Sport’ button, while the ‘Home’ button will take you back to the watch face.

Overall, the experience with the device was pretty good and getting the hang of the UI was fairly simple.

One key new feature of the Mi Watch Revolve Active is the inclusion of Alexa. The digital assistant works pretty much the same as it does on any Echo device and can be summoned by long-pressing the ‘Home’ button. It should be noted that there is no speaker on the wearable, so Alexa is limited to giving text-only responses. I could ask about things like the weather, conversions and everything else. It can also be used to control any Alexa-paired IoT devices that you have. It should be noted that since the wearable has no Wi-Fi or LTE capabilities, it is wholly dependent on being paired with the smartphone.

As I noted in my first impressions, Alexa support is limited. So you cannot use Alexa to start a workout or access any specific functionally of the wearable itself. This would greatly increase the intuitiveness of the device and make it much easier to start specific workouts. However, a spokesperson from Xiaomi reached out to us and assured us that these features will be added in a future update. There is no fixed date for the update, yet, but the company says that it will come in the next few months.

The Xiaomi Mi Watch Revolve Active pairs with the Xiaomi Wear app. As with pretty much every other wearable, the app is where users can access work out history and get detailed information. It is also where users will be able to tweak the device’s settings.

Information is delivered in the form of cards. At an initial glance, each of the cards will show you the last recorded reading. Tapping on any of the cards shows you the information in greater detail and also lets you access older data. Users have the option of sorting the order of these cards and hiding any that they have no need for, such as the female health tracker. The feature is slowly becoming commonplace in wearables, but none have ever questioned a male’s decision to turn it on. As such, the Xiaomi Wear app would let me track my periods, even after I had specified that I am male.

Speaking of which, female health tracking on the app is independent of the information gathered from the wearable. The system itself is pretty basic and only requires information like cycle length and last date of period to make cycle predictions. Thankfully, it seems like the app does take into account information such as pain levels, bleeding and mood before making predictions, which is a good thing as all that can affect periods.

As swimming was out of the picture, I used the wearable to track my seven-minute workouts and a bit of cycling. The seven-minute workout follows a set routine and gives me a rough understanding of what I should expect. The Mi Watch Revolve Active stayed quite predictable in terms of heart rate tracking and was within expectations. The app will also inform the user about the duration, the intensity of the workout, calories burned, and average heart rate. This is pretty much on par with the rest of the devices in the range. However, it also offers ‘workout performance’ ratings, which can help users gauge the impact of their training on their bodies. It also shows an approximate recovery time for the user.

While the ‘workout performance’ index is a neat addition, I would have liked it if the app would also give tips on how to improve the index without over-exerting themselves. As of right now, it is a very vague metric and I am left with little understanding on how it comes to a certain rating.

Cycling offers pretty much the same stats as Freestyle workout with the addition of route tracking and elevation. Route tracking makes use of the wearable’s in-built GPS, which makes it very accurate. In fact, the route tracking in the Mi Watch Revolve Active is probably one of the most impressive bit of the wearable. The device was not only able to track the side of the road I was walking on, but was also able to accurately track a wrong turn I made into a park.

As mentioned earlier, Cycling also offered me elevation tracking. While this does seem like a nice addition, I found the results too wayward for my liking. The problem was the scale of the graph would change based on the reading readings, especially along the vertical axis. As such, what may seem like a big spike in a certain workout, may not seem that big when visually compared to another workout. This is compounded by the fact that there is no way to expand the graph.

While the Mi Watch Revolve Active is pretty good when it comes to activity tracking, it falters when it comes to sleep tracking. The watch gave me results that were off by hours. It also seemed to falter when it came to tracking afternoon naps. The watch does try to give you detailed information like sleep rating, length of sleep and so forth. But poor tracking renders it all moot. It should be noted that this is also something that plagued the standard Mi Watch Revolve. It is quite disappointing to note that Xiaomi doesn’t seem to have worked on fixing any flaws.

The wearable is charged via a relatively large magnetic base that clamps onto the bottom of the device. However, while it is larger than most other charging bases, it’s still better than the clamp-style systems which are thankfully being phased out.

The best way to describe the Xiaomi Mi Watch Revolve Active is that it is quintessentially Xiaomi. It offers a lot of impressive hardware and features for its price, but it’s not without its flaws. The fitness tracking, display, and build are definite highlights of the device. However, it offers poor sleep tracking and may disappoint those hoping for a full-fledged smartwatch experience. If you are looking for a fitness tracker in this price range, the Xiaomi Mi Watch Revolve Active will fit the bill. But if you aren’t a big fan of the design, then something like the Amazfit GTS 2 or the GTS 2 Mini might fit your taste.