Vishal and Arya starrer ‘Enemy’ to hit the big screens on this date! – Tamil News 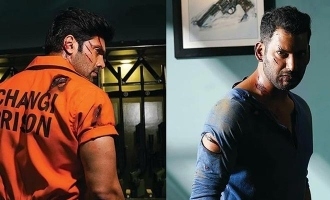 The reel life friends Vishal and Arya are playing rivals on-screen in the action thriller ‘Enemy’. After Thalapathy Vijay & Vijay Sethupathi’s ‘Master’, the Action star and the Sarpatta actor are all set to lock horns on the big screens in 2021. The makers have announced the official theatrical release date as Aayudha Pooja.

Indiaglitz had already updated that the film is in the final phase of post-production and actor Vishal had started dubbing for his portions in Enemy a couple of days ago. Also, we were the first to break to you that the movie is expected to release on Aayudha Pooja in October. Read at: Vishal starts dubbing for the Arya co-starrer action thriller ‘Enemy’! – Latest Updates

A while ago, Vishal Film Factory took to Twitter to make it official that ‘Enemy’ will hit the cinemas on the festival of Aayudha Pooja (October 14). This movie will be released simultaneously in Telugu with the same name on the same date for the Dussehra festival. The film has been shot in glossy locales Chennai, Hyderabad, and Dubai.