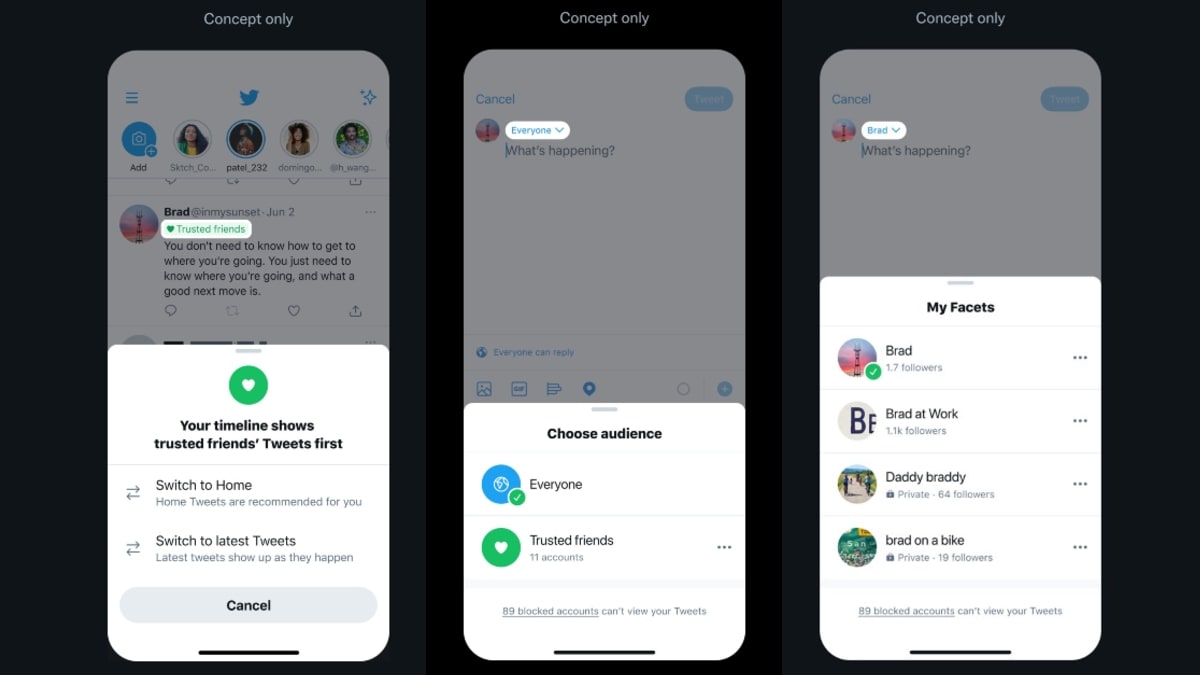 Twitter is working on a few concepts that are aimed at allowing users to better control who can see their tweets. A company designer has shared an idea in which the microblogging website may allow the Twitterati to share a particular tweet to a certain group of “Trusted Friends.” This is like Instagram’s “Close Friends” feature that allows Instagrammers to share Stories to a certain group of people. Another early idea that the social media platform is working upon is Facets that will let users tweet from distinct accounts from within a single account.

As per a tweet by a designer at Twitter, the microblogging platform is “exploring a bunch of ways to control who can see your Tweets”. He shared two ideas while highlighting that the company is “not building these yet.” The first one is having a group of “Trusted Friends” who will qualify to be a group that a user wants to see particular tweets. The feature may allow that user to see trusted friends’ tweets first. This will essentially mitigate the problem of toggling tweets from public to protected and juggling between alternative accounts, if you have multiple handles.

The second idea is aimed at people who have multiple handles like one for personal use, and one for work. The designer tweeted that a feature — that may be called Facets — will let a user tweet from multiple handles from one account, instead of switching between multiple accounts and post the same tweet. Furthermore, followers may also have an option to follow “the whole account or just Facets they’re interested in.”

There is also a feature called Reply Language Prompts that is reportedly under consideration. As per a TechCrunch report, this feature will allow Twitter users to choose phrases and/ or words they don’t want the respondents to post in their tweets. For example, if someone writes a swear word in a reply to your tweet, he/ she will be greeted by a prompt asking him/ her to reconsider the language they’re using in the reply. The words and phrases chosen by the user will be highlighted in the prompt. This, however, will not stop the respondent from tweeting the reply.

Sourabh Kulesh is a Chief Sub Editor at Gadgets 360. He has worked in a national daily newspaper, a news agency, a magazine and now writing technology news online. He has knowledge on a wide gamut of topics related to cybersecurity, enterprise and consumer technology. Write to sourabhk@ndtv.com or get in touch on Twitter through his handle @KuleshSourabh.
More