The first SSD with 96-layer NAND 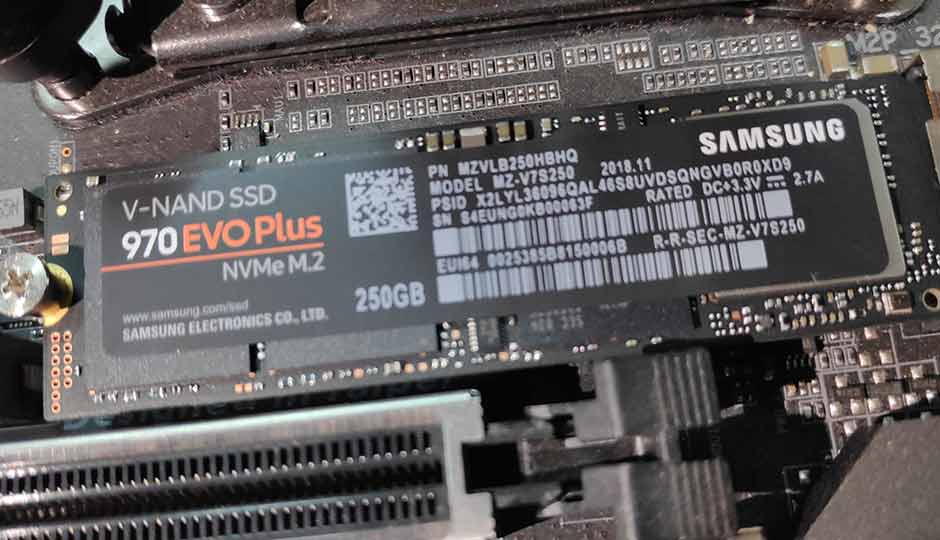 Samsung just refreshed their EVO lineup of SSDs with the introduction of the new Samsung 970 EVO Plus NVMe M.2 SSD. While multiple OEMs have demonstrated 96-layer 3D NAND memory (WD, Toshiba and SK Hynix) for nearly a year now, Samsung would be the first to have a product on the market with the new chips. The Samsung 970 EVO Plus will be shipping in 250 GB, 500 GB, 1 TB, and 2 TB SKUs. The 2 TB SKU will be coming later this year in April. We’re reviewing the 250 GB SKU today so the write speeds will be lower than the higher capacity SKUs. Nevertheless, here’s how it fared.

The specifications for all the currently available SKUs can be found below. Details pertaining to the 2 TB SKU which is coming in April shall be available much closer to launch. The 96-layer NAND that we see in the Samsung 970 EVO Plus was announced last October. The Samsung Phoenix Controller is the same that we saw with the Samsung 970 EVO. However, the firmware has been modified to make the most of the new NAND chips.

This does mean that we’re going to be on PCIe 3.0 for the 970 EVO Plus. It’s not as if this SSD will be crossing the bandwidth provided by the PCIe 3.0 standard, so moving to PCIe 4.0 is unnecessary. Unless of course, there are other advantages such as latency improvements which will help with the performance. Samsung’s enterprise portfolio will, however, see the move from PCIe 3.0 to PCIe 4.0.

One could ask why aren’t we seeing a 96-layer NAND in the form of a PRO series SSD? Well, the Samsung PRO series typically use the more durable MLC nand and as of now, they’re working on the second generation Z-NAND which is more likely to end up in the PRO series. We have no information as to when that’s bound to launch. With the TLC based SSDs offering 3500 MB/s read speeds, we are really interested to see what the next gen PRO SSDs have to offer.

Samsung provided the 250 GB SKU which is the lowest SKU and what would be most commonly sought in the market. Unfortunately, all other brands tend to provide the top-end SKU which is generally 960GB or 1TB for our benchmarks. This puts the new Samsung 970 EVO Plus at a disadvantage in our benchmarks. We believe that the 1TB SKU of the 970 EVO Plus would perform much better as is the case with all SSDs.

Our test rig has been upgraded to keep up with the times and the new Windows releases. This means all our legacy scores are not comparable, especially given the fact that CPU performance has gone up by a significant margin. Here’s what we’re running at the moment.

We start out by running a mixed workload that would be more like what an SSD would encounter on a day-to-day basis. We see that the older Samsung 970 EVO ends up with much better performance in mixed workloads of randomised read and write runs. 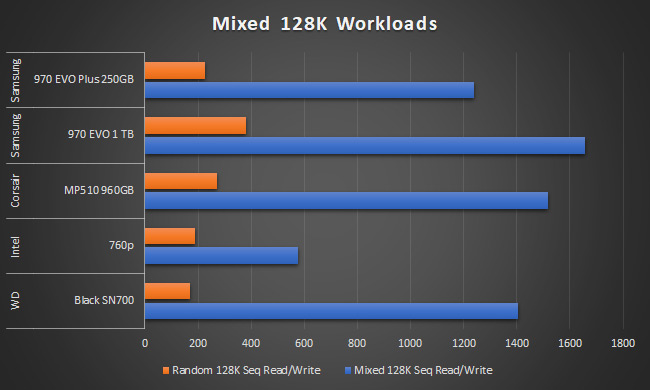 Here we see the Samsung 970 EVO Plus 250GB is very much at par with the other drives in the market right now. Bursty workloads tend to have similar figures across controllers. There is always the generational improvement. Here the read speeds are around the 50 MB/s mark while write speeds were comparable to the older 970 EVO 1TB. 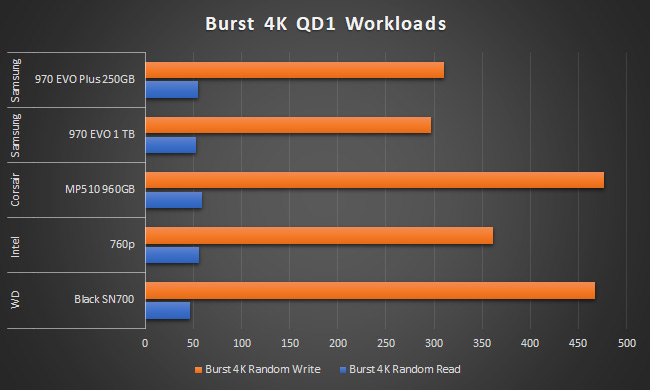 In sustained 4K workloads of short queues, the performance of the 970 Evo Plus doubles compared to the previous workload. However, the older 970 EVO 1 TB ends up being better with higher write speeds. 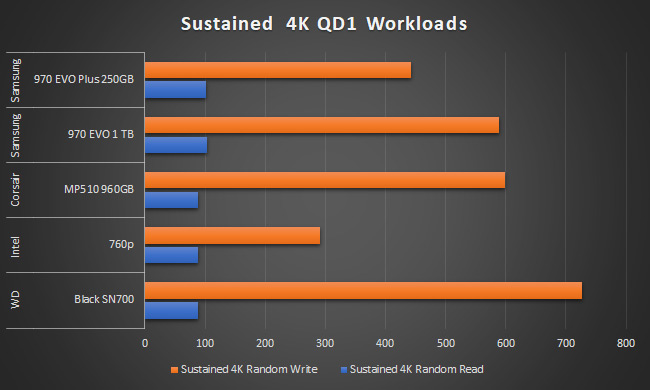 This is where the capacity handicap of the 250GB SKU rears its head. We see the 970 EVO Plus has the highest read speeds among the competition but is at roughly half the write performance. The only other drive to share in its company is the 760p from Intel. Bursty workloads are a bit forgiving and don’t get you the absolute maximum that you drive is capable of. That’s where the next graph comes into the picture. 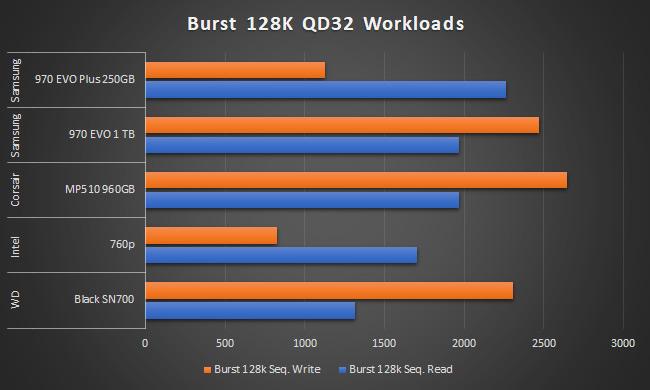 The read speeds on the Samsung 970 EVO Plus puts it clearly ahead of the competition. Write speeds are handicapped once again but isn’t the absolute worst of the lot. Looking at the 970 EVO 1TB and the Corsair MP510, we can only assume that the write speeds would be higher than 2000 MB/s on the 1 TB SKU. 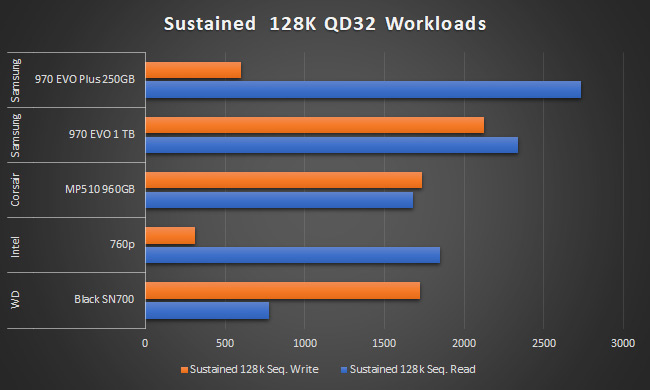 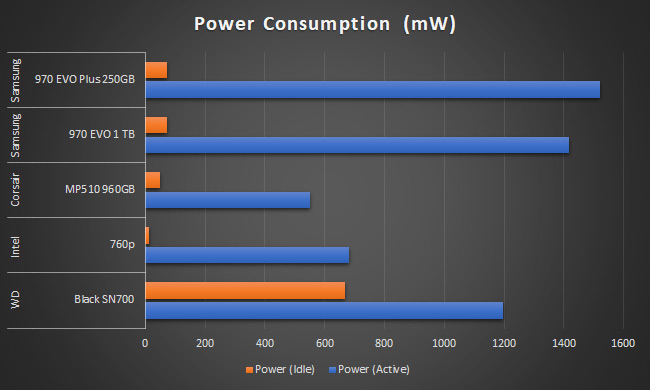 This not being an apples-to-apples comparison on account of the significant difference in capacity makes it difficult for us to glean the advantage that the 96-layer 3D NAND brings to the table. All our benchmarks are performed with 1 TB or 2 TB SSDs while the unit sent to us by Samsung was a 250 GB SKU putting it at a disadvantage. Despite the obvious handicap, the 970 EVO Plus does match up to its predecessor in certain benchmarks, especially when read speeds are concerned. With regards to write speeds, we can’t say for sure. At Rs.25/GB the Samsung 970 EVO Plus is a good SSD which sits in the mid-range segment.