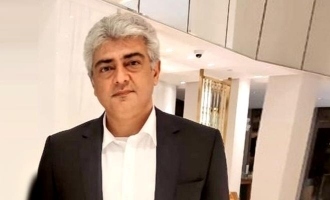 Thala Ajith’s much-anticipated film of the year ‘Valimai’ shooting is nearing completion. The team headed to Russia a few days ago and we brought the news first to you along with the video.

Now the latest reports state that the team has completed shooting an important fight scene in Moscow – the capital city of Russia and are flying back to Chennai today. The foreign schedule got delayed due to the ongoing Pandemic and now Thala fans are excited to know the wrap.

Fans were expecting the second single of Valimai on composer Yuvan’s birthday but to their disappointment, the track was not released. However, the latest buzz states that a new poster featuring Ajith along with a massive update is on its way. And if things go right the film will be released on Diwali this year.

Touted to be a thriller movie Ajith plays a cop in ‘Valimai’, and the film is reportedly about his battle against illegal bike racing. The film produced by Boney Kapoor under the banner Bayview Project. The film also has Huma Qureshi, Karthikeya, Sumithra, Raj Ayyappa, and Yogi Babu in crucial roles.