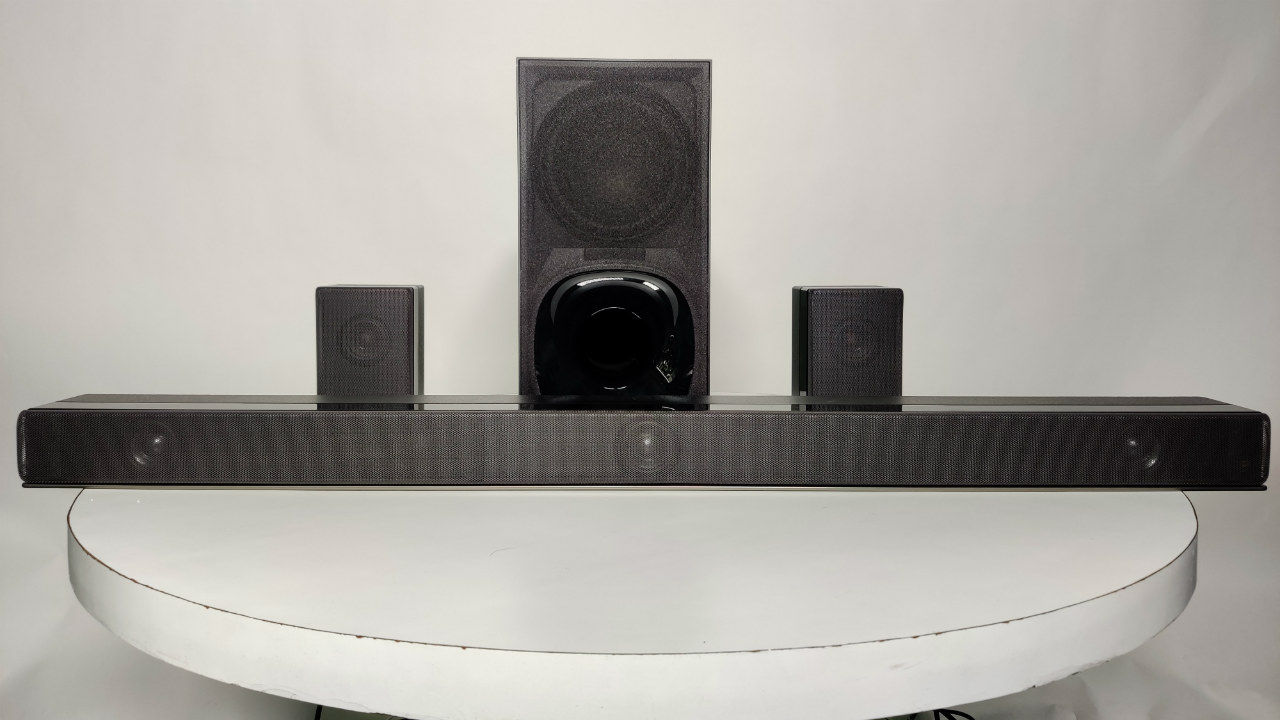 Soundbars have cemented themselves as must-haves if you want to enhance the sound from your flat-screen TV without investing in a dedicated home theatre setup. In the past few years, we have seen interesting tech make its way to soundbars. We have seen some soundbars with upward-firing speakers to give you a Dolby Atmos effect, we have also seen soundbars without a subwoofer, offering a plug and play setup. We have also seen some modular soundbars where you can add a subwoofer and surround speakers separately. Today, we have with us the Sony HT-Z9F. In the box, you get the soundbar and wireless subwoofer. You can upgrade the system to become a 5.1 by spending about 10k, making it a 5.1 setup. We reviewed the system with the surround speaker.

What’s in the box

In the box, you get the soundbar itself along with a detachable magnetic cover for the front. It is nice that the front is detachable as you can choose to expose the drivers or hide them behind the cover, based on the aesthetics you like. You get the soundbar along with the remote control in the box, an HDMI cable, and wall mounting brackets. You also get two AAA batteries. The remote control accompanying the system is compact and has all the essential functions. There is a vertical surround button on the remote and we will delve into that in later sections. Know that when you use ARC to connect the soundbar to the TV, you can control the bar from the comfort of the TV remote.

When it comes to connectivity options, the soundbar has an HDMI port for eARC and two HDMI pass-through ports that supports 4K HDR pass through. At a lower price point, we have seen soundbars like the JBL SB450 with 3 HDMI passthrough ports with 4K HDR support. However, the JBL lacks a lot of features we have on the Sony HT-Z9F including the option to make it a 5.1 system. The Sony HT-Z9F also has an optical port, Analogue in, USB port and a Lan port. It supports Bluetooth and WiFi as well. The speaker does boast of support for DTS-X and Dolby Atmos, which is nice. However, without top firing speakers, we were interested to see how the object-based surround sound works on this bar. When it comes to smart features, the speaker supports Amazon Alexa, Chromecast built-in and Spotify, which is great.

Setting up the Sony HT-Z9F

Setting up the speaker does take some work but it isn’t rocket science, especially if you don’t wall mount it. The soundbar connects wirelessly to the subwoofer and the surround speaker, eliminating the problem of cable management. Just remember, all of them need a power supply so ensure the place where you decide to keep the sub and surround speakers has access to a powerpoint.

Just like the HT-X8500 (read our review here), the HT-Z9F supports eARC, making it future proof. eARC has higher bandwidth than the ARC port and also gives the bar access to DTS: X and Dolby Atmos content.

Once you place the speakers, and the sub, power them on. You should see a green light come on at the back of the surround speakers and subwoofer. If the light is red, worry not. There is a sync button present that lets you “sync” the speakers with the main bar. When you switch on the TV after connecting the device via ARC, you will have to follow step by step instructions such as logging into the WiFi, etc. and you are good to go.

One tip is that the surround speakers should be at ear height, facing the place you will sit to ensure the best surround effects from the system.

A premium finish is the first thing that comes to mind when you first look at the soundbar. The removable metal grill adds variety to the design of the bar. So, if you like the have the drivers exposed, you can do so by simply removing the grill. The soundbar is long enough to sit flush beneath a 50 or 55-inch TV. Anything smaller, and the bar will look overpowering. It has a small display up front to show you the current input and standby status of the bar.

The wireless sub is big and quite heavy. The subwoofer is front-firing with the pairing button and light hidden at the back. The satellite speakers are small, compact and have 4 rubber feet if you want to put on a tabletop or a shelf. You can also wall mount the speaker if you like. The speaker has clear markings at the back for “Left” and “Right” surround speakers.

Overall, the speakers are well built, have a clean design and premium feel.

Before we get into performance, know that the speakers have a lot of settings and customization options. Connect it to the HDMI ARC port of the TV and you will be able to access all the options on the TV display. With built-in Chromecast, you can play or rather “cast” music from your smartphone to the speaker. Sadly, this is audio-only casting so you can’t cast your favourite videos from YouTube or Netflix to the TV via the system. You also get support for Spotify and Alexa built right into the speaker. We have seen Alexa support on the Bose Soundbar 700 (read our review here) and it is nice to see it here as well, along with access to Spotify. The menu, where you see these options is easy to navigate and it is simple to select your input source. Know that you don’t need the display on to use the soundbar to listen to music as you can choose your sources from the comfort of the remote control. You also have access to quite a few setting options to tinker with including the speaker settings, audio settings, HDMI settings system settings, network settings and more.

Let’s break down the performance of the soundbar into movies, music and gaming performance.

Watching movies, you will realize that the soundbar has a clear reproduction of sound. The dialogue is clearly audible even if there is background score playing. From the bike chase sequence in Mission:Impossible to the guns firing all over the place in the Matrix and even in shows like Altered Carbon where you have gunfights and bullets whizzing all around, the soundbar does a good job of immersing you. Even though the sound is coming from directly in front of you, the channel separation is good. With the surround speakers, you do get a more immersive experience, especially during the action sequences. From vehicles whizzing past you to bullets flying all over, the experience is immersive. One thing to consider is the placement of the surround speakers. They should be facing you and should be 6 feet or less away from the seating position for the best experience. The bass from the subwoofer packs a sufficient punch without sounding overwhelming. To give you a comparative perspective, the JBL SB 450 (read our review here) packs in a louder punch with bass but I prefer the bass response of the HT-Z9F. It doesn’t feel overpowering like the JBL SB 450.

Overall, for movie watching the Sony HT-Z9F is a good experience.

The Music performance of the Sony soundbar is what you’d expect from a Sony speaker. It is also dependent on the kind of music you listen to. So with classic rock, where the bass isn’t necessarily overpowering, it sounds clean. Vocals are distinguishable from the instruments and the highs are clear. Electronic music like Daft Punk is clear where you can make out sounds of the synthesizer. The bass response is present on all these songs without feeling overpowering. However, those that want more bass will wish it were better. You can control the level of the bass from the settings of the soundbar. However, if rock and metal are genres of music you enjoy, you need to look elsewhere.

For gaming, we played Marvel’s Spider-Man, God of War and Doom. Channel separation works well in all the games, especially when playing Spider-Man. You can hear the city pass you by through the surround speakers while you swing, adding to the immersion with the surround experience.

In a game like Doom which needs you to be on your toes all the time, you can make out the position of the demons thank to the surround speakers. Even the sound of the shotgun in the game has enough of a thump thanks to the subwoofer.

The only downside with the Sony HT-Z9F is the Dolby Atmos effects. Sure, the speaker supports it but it doesn’t have any upward-firing drivers. So when you switch on the “Vertical S” feature on the remote control of the speaker, you don’t get the experience of having height channels active. It does increase the soundstage a bit, but with the surround speakers, I prefer to keep this feature off.

The bundled remote control with the soundbar is simple. All the buttons are neatly laid out. The remote control isn’t as simple as the one found on the Sony HT X 8500 but it isn’t one that is complicated to read. You have the source selection and audio settings up top whereas the bottom half has the volume controls, playback controls, and controls for the rear speakers and sub levels. The centre of the remote is dedicated to navigation and settings.

So, here’s the ever-important question. Should you spend 60k on this soundbar along with an additional 10k on the surround speakers? It is a little hard to give you a yes or no. The truth is that 70k is a really good budget to build a custom home theatre ensuring you can upgrade the amplifier or speakers in the future. It is a great budget for a dedicated home theatre sound system where you could get an amp from Yamaha, Denon, Onkyo and more. You could also pick and choose the permutation and combination of speakers and subwoofer based on your room. The Sony HT Z9F is for those that want a plug and play setup, a simple out of the box solution. If you have the money then you should definitely consider it for its performance, ease of setup and feature-rich package. But if you are an enthusiast, then you should consider building a home theatre for the same price.