Sara Ali Khan, who is currently holidaying in Europe, has shared a collage picture on her Instagram stories from his trip to Amsterdam and Netherlands. The actress is a travel enthusiast and keeps giving her Insta followers major travel goals. On Wednesday, the actress shared a post and captioned it as, “The only dam I give”. In the first image, Sara looks pretty in an orange sweatshirt and animal print pants as she poses for the camera. In the second image, she is offering a glimpse of her meal. The third image shows a cup filled with cookies and candies. On the cup, the text reads, “Work hard cheat harder”. 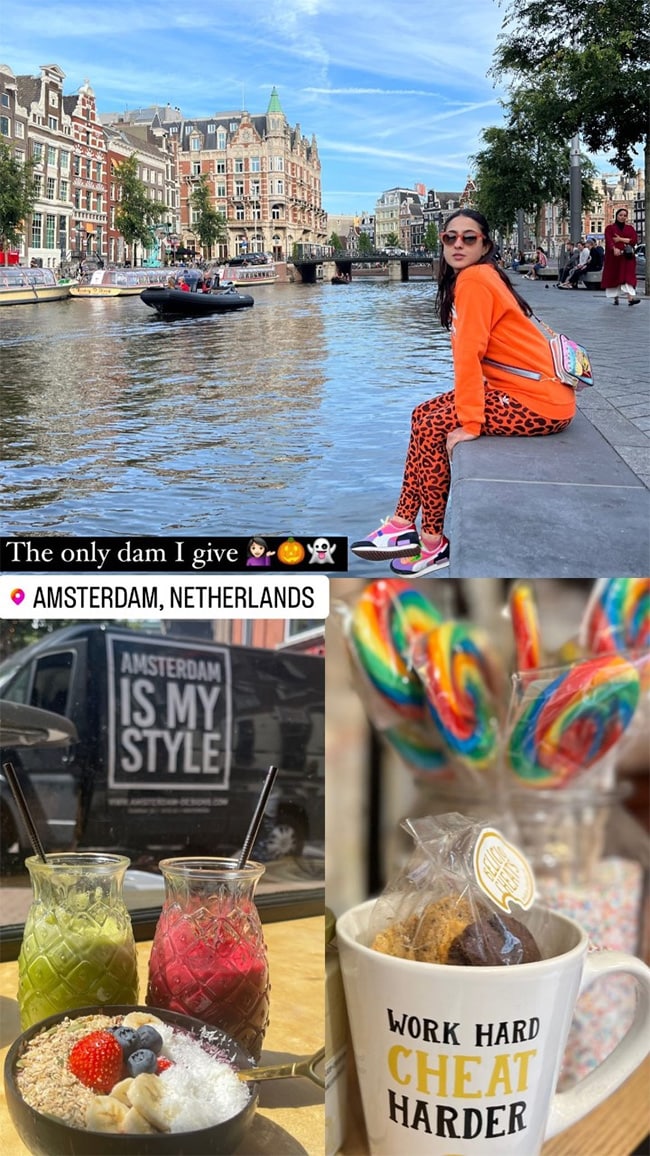 Before jetting off to Europe, Sara Ali Khan was holidaying in London with her brother Ibrahim Ali Khan and her friends. Soon after she landed, Sara shared several pictures on her Instagram handle and captioned the post as, “Summer vibe, With my tribe Kindly like, share and subscribe”.

Sara Ali Khan also met her father, Saif Ali Khan and her half-brother Jeh, during her stay in London and spent some quality time. Sharing adorable pictures on her Instagram handle, she wrote, “Keeping up with the Pataudi’s…” (sic).

Meanwhile, Sara Ali Khan has been making headlines ever since Karan Johar unveiled the promo of the upcoming episode of Koffee With Karan 7. In the show, she will be appearing with Janhvi Kapoor as a guest and might spill the beans on her personal life.

On the work front, Sara Ali Khan was last seen in Aanand L Rai’s Atrangi Re, co-starring Dhanush and Akshay Kumar. Next, she will be seen in Laxman Utekar’s untitled with Vicky Kaushal.