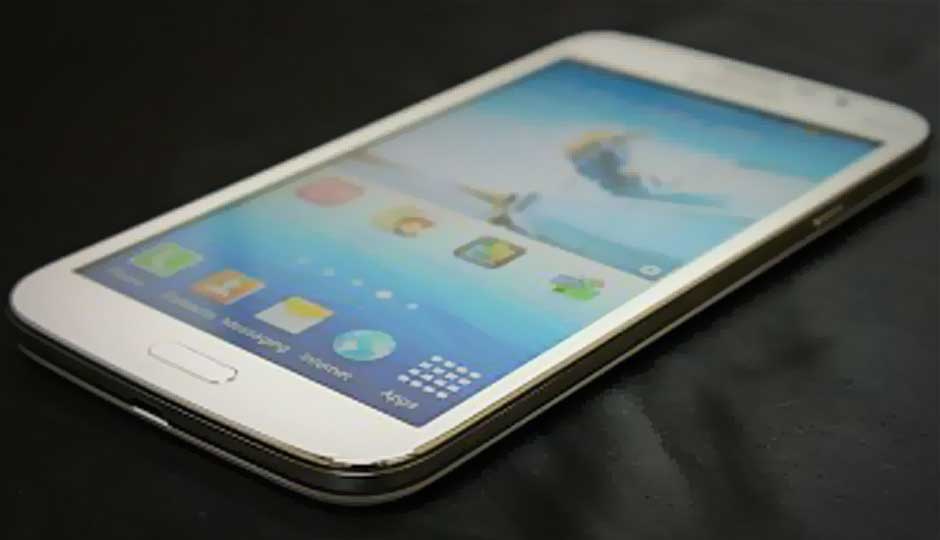 Once upon a time, in the dawn of the smartphone era, around 2010, a 3.5-inch device was considered to be the ideal size for a smartphone and there were talks of what the Dell Streak could and couldn’t do as the next-gen smartphone.

Fast forward to 2013, and the generation of the smartphone-tablet hybrid has made its presence felt. We have the 5-inch screen size dominating the smartphone market, and of course, larger phablets ranging all the way to the 7-inch tablets which give you the ability to make calls – how times have changed!

Samsung was the first company to make a successful large display smartphone, with the original Galaxy Note. The company recently showcased two new phablets in India – the Samsung Galaxy Mega 5.8, which boasts of a 5.8-display, and the Mega 6.3, which has a 6.3-inch display. Today, we have the Galaxy Mega 5.8 for review. Is the device worth considering as your next big smartphone?

In two words – it’s big. You have the 5.8-inch display with a qHD resolution. It runs on Android 4.2 Jelly Bean straight out of the box skinned with Samsung’s TouchWiz UI. It has the same plastic feel and slightly curvy design found on all other Samsung Galaxy smartphones like the S III, S4, Note II and more.

Here is a quick look at the specifications of the Samsung Galaxy Mega 5.8 when compared to the competing smartphones in the same price range.


From the specifications table it is evident that if a big screen device is what you desire, then the Huawei Ascend Mate is the device for you when compared to the Galaxy Mega 5.8, on paper at least.

Staying true to the Samsung tradition, the Galaxy Mega 5.8 has the same look and feel as the Note II, but in a 5.8-inch form factor. You have the front facing camera above the display along with the one physical home button and capacitive menu and back buttons on its either side.

The rear of the Galaxy Mega 5.8 has the camera along with an LED flash and the speaker all kept next to each other. Rip out the rear panel and you have access to the battery along with the two SIM card slots and the microSD card slot. The bottom of the smartphone has the microSD card slot where as the top has the headphones jack. The left of the Mega 5.8 has the volume rocker and the right has the power button; a pretty standard button layout.

In terms of its design, the Mega 5.8 has the standard look and feel that we have come to know from Samsung devices. The biggest difference is that it is really big. It was uncomfortable carrying the smartphone in my jeans pocket and I found myself carrying it in my hand more than in my pocket. Whether the size of the Galaxy Mega 5.8 is too big for you to use as a phone is something very subjective. We have seen people use it comfortably but a majority of people agree that it is a little too big to be used as a phone.

Staying true to Samsung tradition, you have the standard TouchWiz UI overlaying the Android OS on the Mega 5.8. The smartphone comes preloaded with a bunch of apps such as the S Memo, S Planner, S Translator, S Voice, S Travel and the Samsung App store, a bunch of features that we have started seeing on Samsung devices from the days of the S II and the Note II. Since the display is large, you also have access to single-hand operation features such as keypad and in-call buttons, calculator and more.

The Mega 5.8 also has Smart Stay, the ability of the display to remain on so long as you are looking at it. Frankly, this feature feels like a gimmick. I’m not saying that it doesn’t work. But I do have an issue with it. To start with I wear glasses, and with glasses on, the Smart Stay doesn’t work. And when I remove my glasses, well I am as blind as a bat so what’s the point?

Put simply, the UI is something that we have seen on a plethora of Samsung devices and that is a good thing. If you are a part of the Samsung ecosystem or like using Samsung smartphones or are moving from one Samsung device to another, you will like the familiar territory.

Since the smartphone is priced at Rs. 24,900, let us take a look and see how it compares to other devices in the same price range such as the Nexus 4, Samsung Galaxy S III and the Lenovo IdeaPhone K860.

As you can see from the scores, the Galaxy Mega 5.8 doesn’t have the best benchmark scores. If a device with raw horsepower is something that you are looking for then there are better options available at the same price range.

Starting with the response of the Mega 5.8’s touchscreen, we’ll have to say it is very good. The interface is smooth and responsive. Browsing the Internet, playing games, and generally anything to do with navigating the touchscreen is a good experience.

The keyboard on the Samsung Galaxy Mega 5.8 is good too. You have the standard QWERTY keyboard with access to numbers above it. The keyboard is good and well laid out for two hand use and there is also the mode where you can squeeze the keyboard for single hand use, be it navigating websites, texting or just plain typing, the keyboard is nice and well responsive.

The 5.8-inch display has a 960×540 pixel resolution giving it 190ppi pixel density. The display has good viewing angles, but you do have some rough edges, with the general impression of a relatively low resolution display, when compared to most modern displays. When we saw the smartphone for the first time, we saw it next to the 6.3-inch Galaxy Mega, and that device has an extremely crisp display. We have also seen the Huawei Ascend Mate, which has a 720p 6.1-inch display and that looks way better than what we have on the Mega 5.8. We do wish the display resolution of the smartphone were better and this is one place where the Mega 5.8 truly fails.

Speaking of games, all of them worked on the Mega 5.8, but the likes of Dead Trigger stuttered with the slightest increase of tension onscreen and the lag is quite noticeable. Angry Birds Star Wars, Subway Surfers, Words With Friends and more ran quite smoothly and it was a treat playing the games. Graphically intense games however will stutter.

Moving to the calling capability of the Samsung Galaxy Mega 5.8, put simply, it is good; no complaints with the quality. Since the smartphone has a 5.8-inch display, which is bigger than the Note II, it may be a bit uncomfortable for some to use on a day-to-day basis. Holding such a big phone to your ear will be difficult and uncomfortable for some. If you are one who doesn’t mind a big device, then you shouldn’t have any complain with the size of the device.

The camera on the Galaxy Mega 5.8 comes with a bunch of shooting modes such as auto, sports, panorama, sound and shot (This mode adds a few seconds of background sound with the image), best face, continuous shot, best face and beauty face. Phew! That’s a lot of modes. Coming down to the actual performance of the camera it is good, but there are better options out there for the same price range. In outdoor conditions where the lighting is extremely good, you get some really beautiful shots. Indoors however, there is loss of detail especially if you blow the image up to its actual size.

Natively the Samsung Galaxy Mega 5.8 recognised MP4 without any issues. It refused to recognise AVI and it recognized the video in the MKV videos but not the audio. You can however run all the audio and video formats on the device through third party apps.

In terms of its battery life, the Samsung Galaxy Mega 5.8 has enough juice to get you through the average day, especially if you consider the size of the display. Sure, if you keep the brightness high and leave smart screen on, then the consumption of battery will be fast. In our continuous video playback test, the smartphone lasted for a little over 7 hours with the brightness on full as well as the volume. The Wi-Fi too was on.

Bottom Line
It’s difficult to recommend the Galaxy Mega 5.8. To start with you get better specifications from the Huawei Ascend Mate for the same price. Sure, the Mega 5.8 has a good camera; works well as a phone, and features Samsung shenanigans. However, the display and build of the device feel lacklustre when compared to the competition. If you want a device with a really large display that isn’t the Galaxy Note II, you should consider the Galaxy Mega 6.3 or the Ascend Mate. If you want a powerhouse of a smartphone for Rs. 25K, there are better options out there.