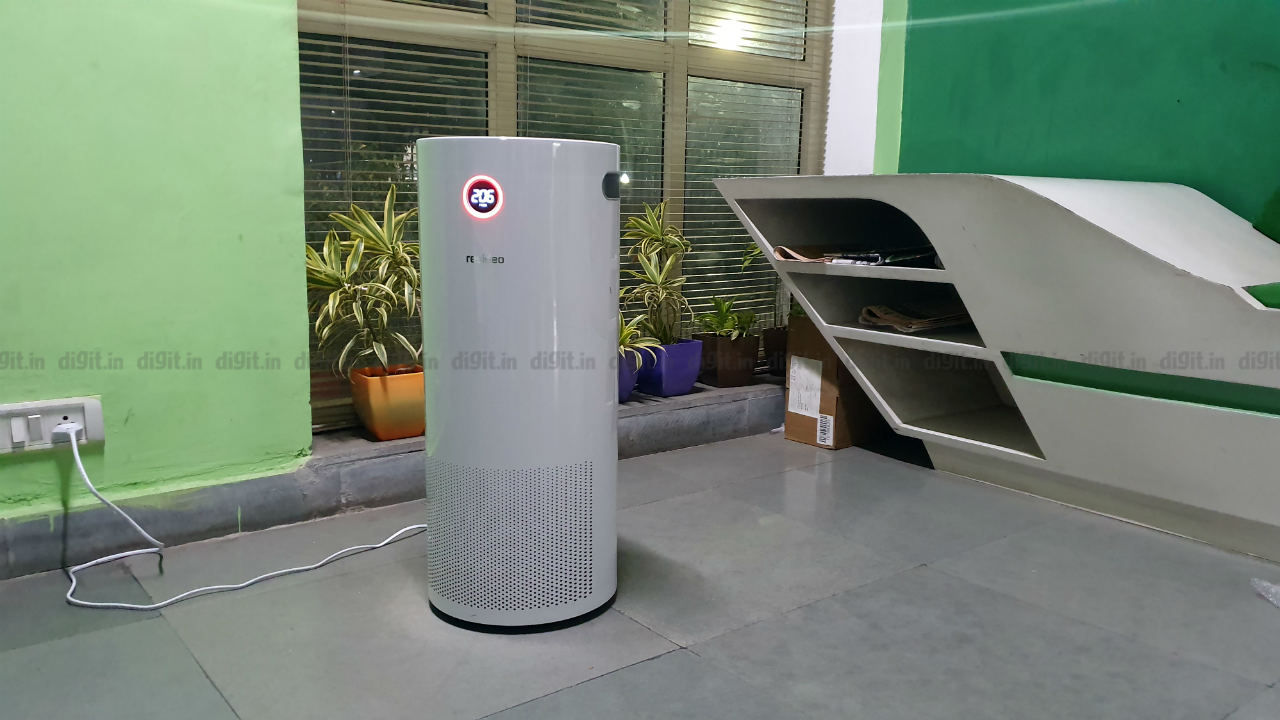 The Resideo Resi 1618 was launched late in 2019 but it boasts of impressive specs to combat rising air pollution. This year, pollution levels have again touched a record high and we tested several devices and many failed to perform as per our expectations. However, can the Resi 1618 by Resideo leave a lasting impression? Find out in our detailed review.

The Resideo Resi 1618 comes equipped with a single H-12 grade filter that actually is a combination of two different types of filters. This is similar to the combined filter implementation we’ve seen on the Dyson Pure Cool and the Blueair Classic 280i. After testing multiple air purifiers, we’ve found that combining filters works well and it is also more convenient as the hassle of filter replacement is reduced as well. There are rubber gaskets on the top and bottom of the filter, which enable a better seal, barring unfiltered air from creeping in. There’s a small latch on the bottom, where the filter fits, and turning the latch raises the filter by a few centimetres for a tighter seal. 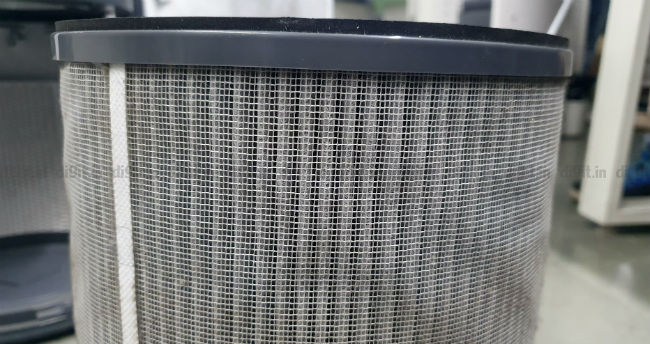 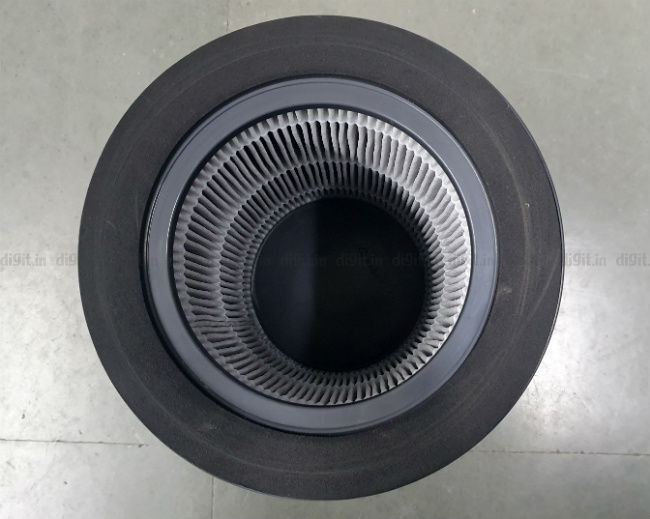 The circular HEPA filter’s outer layer traps larger particles like dust and hair while the HEPA filter removes PM2.5 and PM10 particles from the air. The carbon filter sits behind the HEPA filter, which we think should ideally have been the other way around since carbon filters usually have a longer lifespan than HEPA filters. Placing carbon filters before can help increase the longevity of the HEPA filter. Replacement filters for the Resi 1618 cost Rs 3,500 and depending on how high the pollution levels are in your area, it can last you for six months or more. 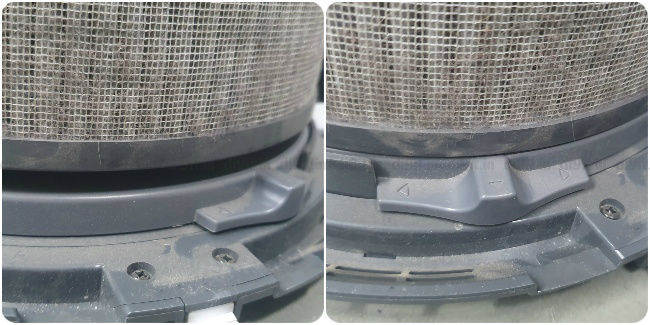 We tested the Resideo Resi 1618 in two different rooms, which have varying air quality levels and represent real-world testing conditions. In the first area, the level of pollutants were extremely high with PM2.5 at 554, PM10 at 672 and the overall AQI at 634. In the 45 minutes we ran the air purifier at full speed, the PM2.5 levels came down to 26, PM10 to 49 and the overall AQI improved considerably and stood at 43. Removing such a high level of pollutants from the air is a difficult task but the Resi 1618 excelled at it. 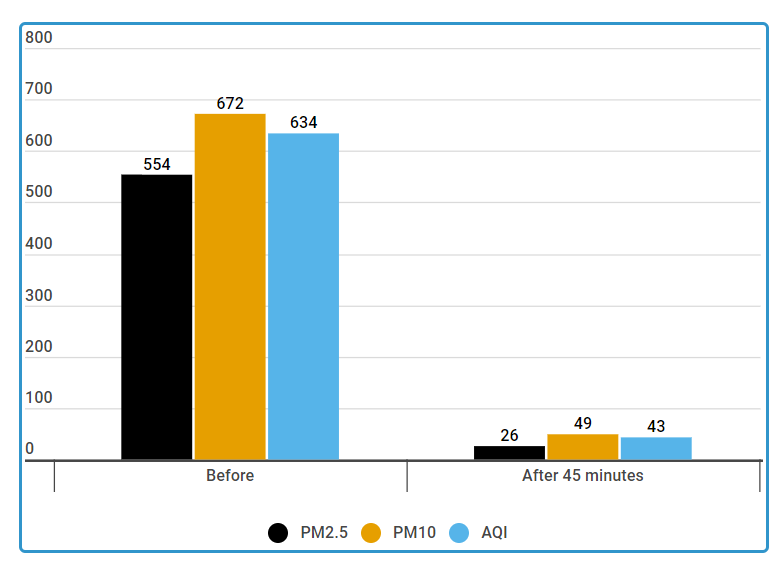 In the second room, the pollution levels are generally low but this makes it more difficult for the purifier to improve the air quality by a notable margin. Before we started our test, the PM2.5 and PM10 measured 133 and 142 respectively, while the overall AQI was at 310. After 45 minutes, the PM2.5 levels were down to 21, PM 10 at 34 and the AQI stood at 35. In this case too, the air purifier performs consistently and exhibits commendable performance. 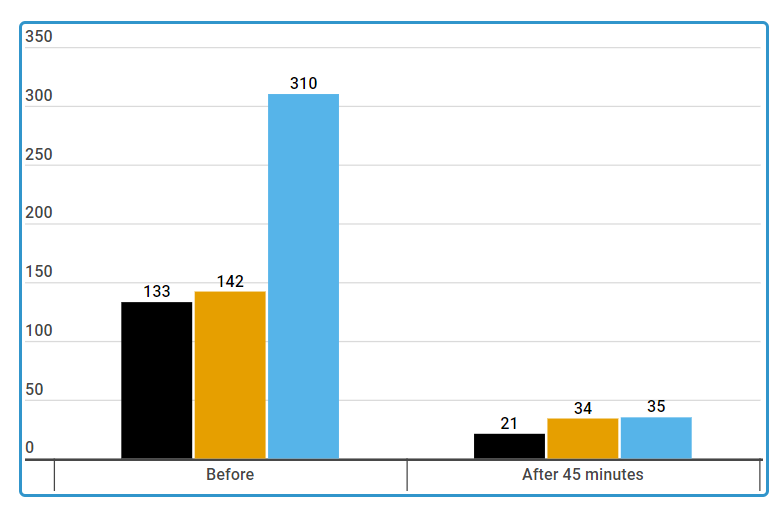 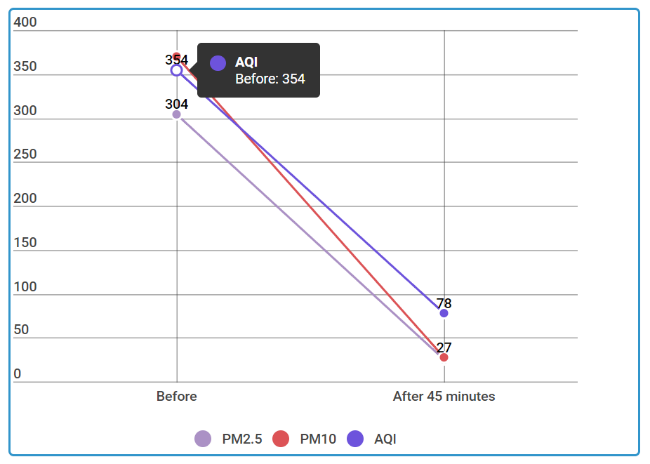 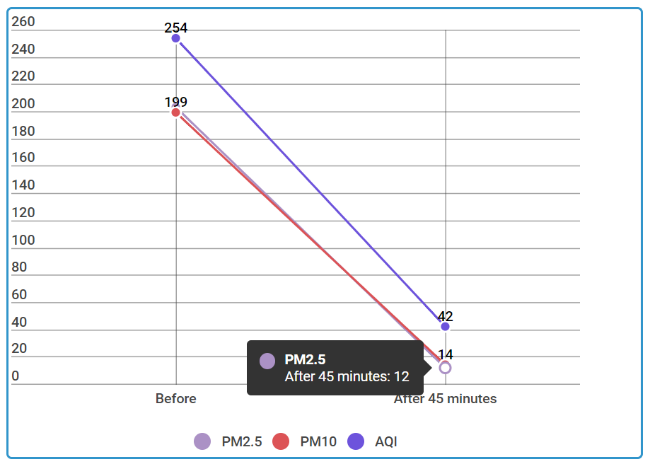 Particulate readings and AQI graph for Blueair Classic 280i

To ascertain how well the Resideo Resi 1618 was performing, we used the Kaiterra Sensedge air quality monitor. The monitor is capable of sensing PM2.5 particulates inside, along with overall AQI, temperature and humidity. The device is tested and certified by the RESET standard for accuracy and is fully compliant with the WELL v2 building standard for performance. Using Sensedge, we measured indoor air quality metrics before commencing our tests. It also logged changing air quality levels per minute giving us excellent insight into how well an air purifier performs. 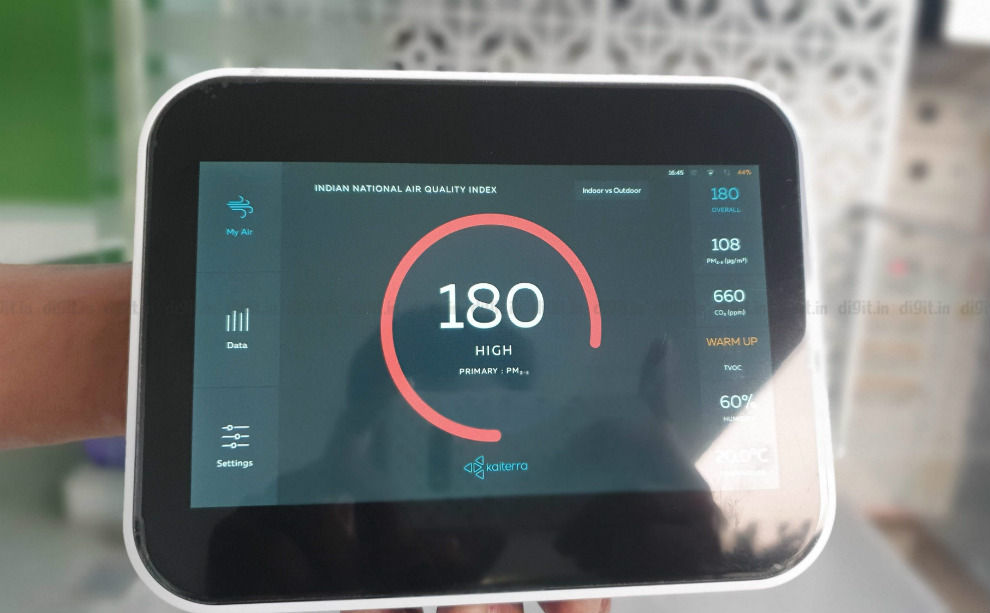 The Resideo Resi 1618 air purifier exhibits good build quality, thanks to the use of sturdy ABS plastic in its construction. The tall cylindrical shape blends in easily with the decor of a modern home but due to a display on the front, it can still easily capture eyeballs. The only problem with its tall form factor is that there’s a high chance that the air purifier can be accidentally toppled over. There are air intake vents on the bottom, at the front and rear, and there are two grooves on the side that are really helpful while moving the device. 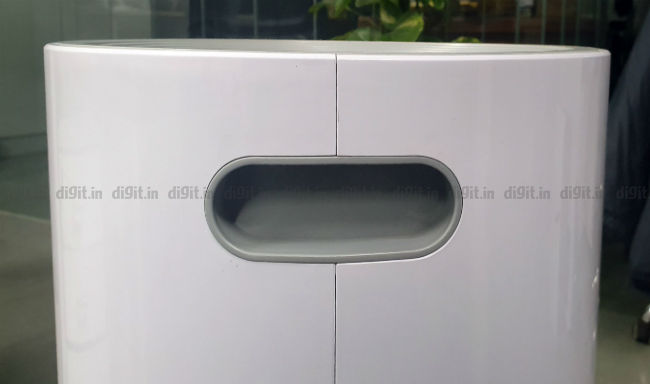 The display on the front is quite useful and it can display PM2.5 and PM10 levels in real-time, along with the Clean Air Delivery Rate (CADR), depending upon ṭhe speed level the device is set at. The air outlet vents are on top and are slightly angled so that clean air is pushed farther away from the Resi 1618 and won’t create an air bubble, which can happen with most box type or cylindrical air purifiers. 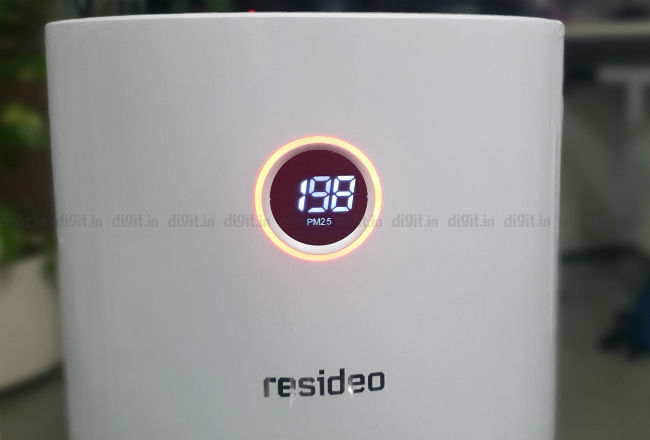 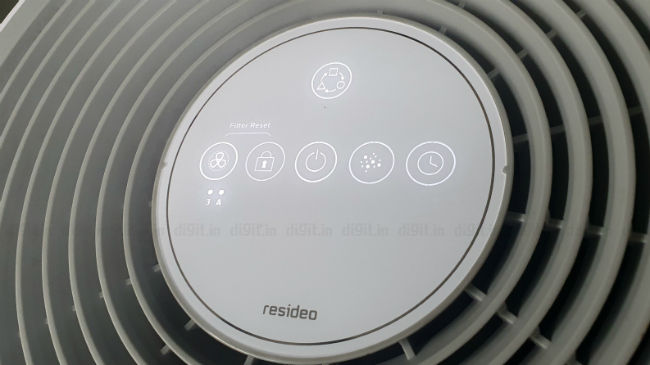 The large display on the front interprets data from sensors embedded in the device and shows current indoor air quality readings. The big display and large flashing numbers are great for imparting information about the current air quality, which is displayed in PM2.5 and PM10. A dedicated button is provided and tapping it will cycle the displayed values between PM2.5, PM10 and the CADR rate at the current fan speeds. A ring of bright light around the display acts asn indicator, as it changes colour depending on how good or bad the air quality is. This simple addition assists in understanding indoor air quality at a glance.

The Resideo Resi 1618 is one of the most efficient air purifiers launched this year and it even won our Zero1 Awards this year in the top-performing air purifier category. The device comes equipped with a single filter, which is a combination of three different types of filters, which is also easier to replace. In terms of performance, the Resi 1618 is capable of beating some higher-priced rivals and it comes with a remote control, which somewhat makes up for the missing IoT functionalities. If you need top-notch performance, the Resideo Resi 1618 is one of the best choices out there. You can also go for the Xiaomi Mi Air Purifier 3 in case you are looking for an air purifier on a tight budget, or at the other end you can check out the Sharp FP J60M air purifier as well.