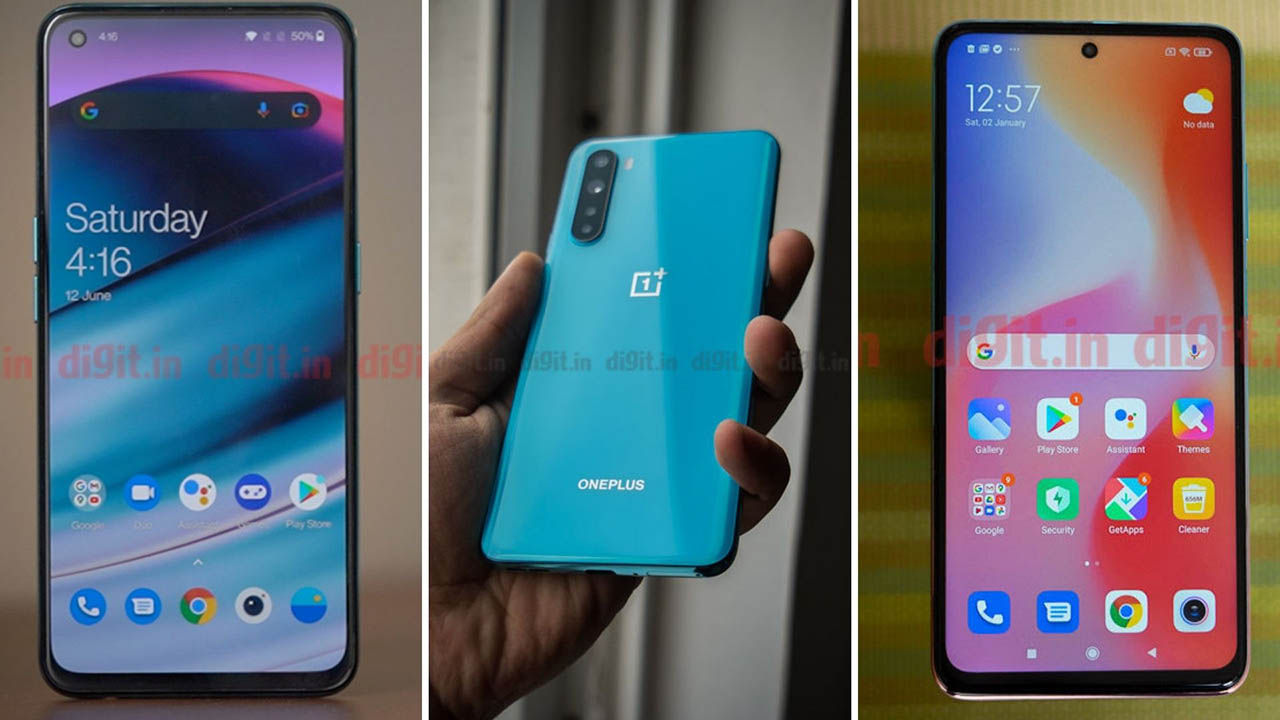 It has barely been a week since OnePlus launched its latest smartphone in the market, the Nord CE 5G. Launched as OnePlus’ most affordable offering in India, the phone has been creating waves since becoming nuts and bolts reality. Starting at Rs 22,999, the Nord CE promises to bring the same experience as the Nord, but at an affordable price.

But away from the realm of lofty promises, does it actually deliver in reality, and more importantly, match up to the standards already set by devices such as the Xiaomi Mi 10i and, for that matter, last year’s OnePlus Nord? Well, read our in-depth comparison of these three phones to find out. 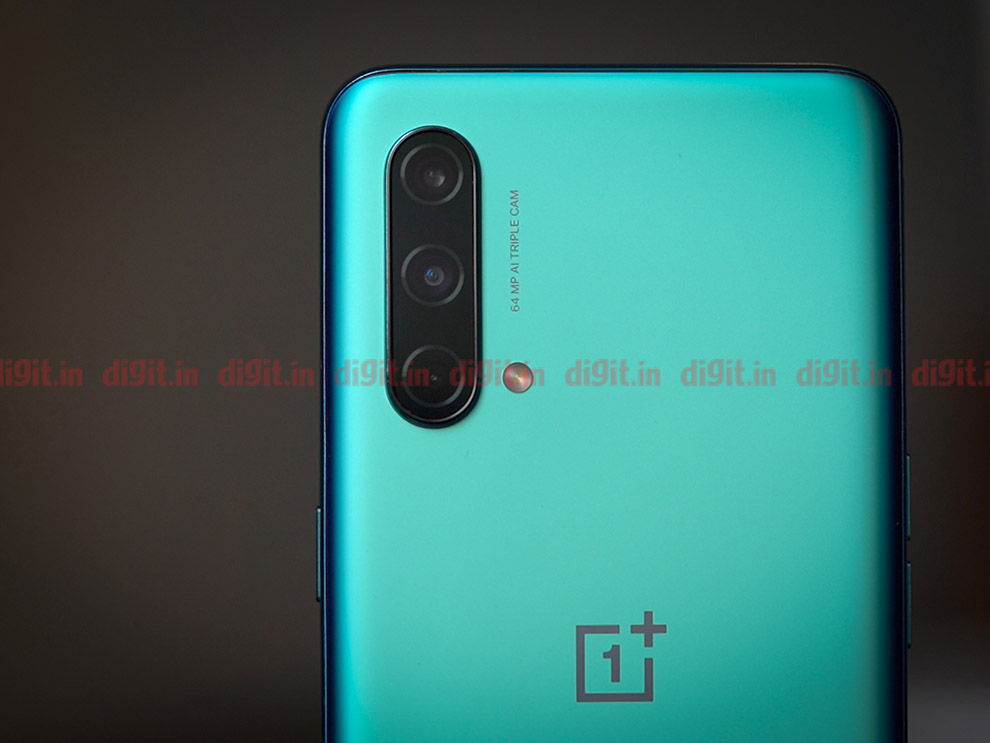 OnePlus Nord is the company’s most affordable phone in the market.

OnePlus Nord CE is based on the core philosophy of the OnePlus Nord from last year; as such, there’s very little in terms of design difference between the two phones. Both the phones offer the same clean and simple design language and are crafted to look classy and premium. However, there are notable design differences between the two which are exposed the moment you lay your hands on the phones.

To begin with, the OnePlus Nord CE is the slimmer of the two phones — in fact, it’s the slimmest OnePlus smartphone since the launch of the OnePlus 6T. It is 7.9mm in thickness and weighs barely 170 grams, giving the phone an advantage over the original Nord, which weighs 184 grams and is 8.2mm in thickness. Unfortunately, however, that’s the only real advantage it enjoys in the design department. 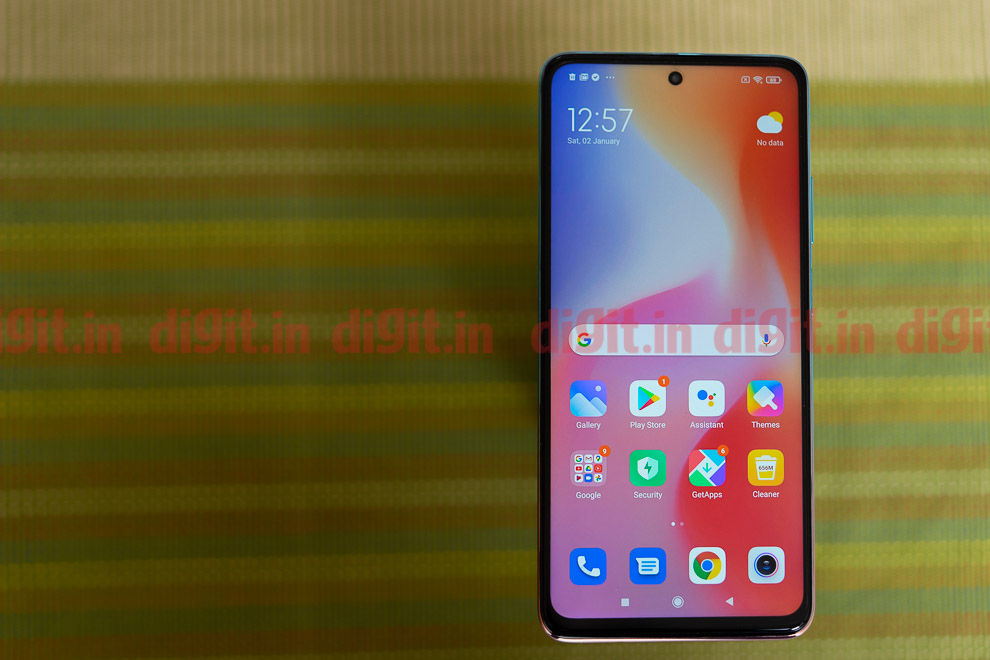 Mi 10i looks good but offers a bulky form factor.

Both these phones come up trumps against the Mi 10i, which honestly isn’t the most appealing phone to look at in the segment right now. While the Mi 10i doesn’t look dull, it also isn’t on the same level as the OnePlus Nord devices, which look like phones from a segment or two above the Mi 10i.

The only win for the Mi 10i in the department is the fact that it’s the most sturdy of the three devices. However, this comes at a cost as it also makes the Mi 10i bulkier than the other two phones at 214.5 grams. As such, if looks are the prime consideration for you, then we’d suggest you go for the OnePlus Nord. Not only does the phone offer a touch of premium, but it also feels solid in hand.

Despite losing to OnePlus phones, the Mi 10i makes a solid comeback when it comes to the display department. The Mi 10i offers not only the biggest but also the most feature-rich panel of the three phones. This is because at the front of the device is a 6.67-inch full HD+ LCD panel — bigger than the displays on the other two phones — which can work at a fixed resolution of 1080×2400 pixels. In addition, the panel offers a peak brightness of 450nits, which is on par with what both OnePlus Nord and the Nord CE offers.

However, where it takes the lead is in its ability to refresh frames at up to 120Hz. The phone also uses a variation of the AdaptiveSync feature found on the Mi 10T Pro, and such can dynamically switch refresh rates between six steps — 30Hz and 120Hz. While the OnePlus Nord and Nord CE also offer support for fast refresh rate, they max out at 90Hz and also do not offer dynamic switching off refresh rate depending on the content being consumed by the user.

On paper, both the Nord CE and Nord offer support for a superior display technology — AMOLED compared to IPS LCD on the Mi 10i — but considering the fact that Mi 10i’s panel is the biggest of the three, and in real-world scenarios offer comparable brightness, viewing angles and colour accuracy, means that it ends up emerging as the winner in this department. Oneplus Nord CE vs OnePlus Nord vs Mi 10i: Performance

Things get a little more interesting once we shift our focus to the hardware under the hood. All three offer comparable hardware and real-world performance. To begin with, the OnePlus Nord CE 5G brings a Qualcomm Snapdragon 750G processor with an octa-core CPU with two performance cores running at 2.2GHz and six power-efficient cores running at 1.8GHz. Adreno 619 GPU backs this with upto 12GB LPDDR4X RAM and upto 256GB UFS 2.1 storage options to choose from. It runs on OxygenOS 11, which is based on Android 11, out-of-the-box.

In comparison, the OnePlus Nord gets a Snapdragon 765G chipset which offers a 1 + 1 + 6 configuration. As such, there’s one prime A76 core clocked to hit 2.42GHz, another A76 core programmed to touch 2.2GHz, and six A55 cores running at 1.8GHz. For graphics, there’s Adreno 620 GPU. The original Nord also runs OxygenOS 11, which is based on Android 11. 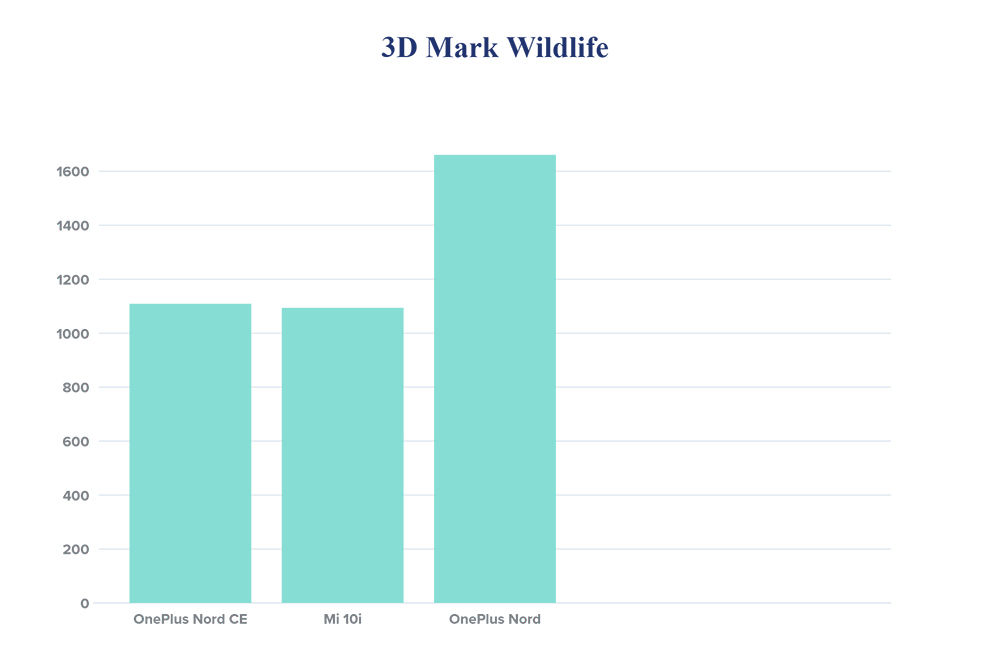 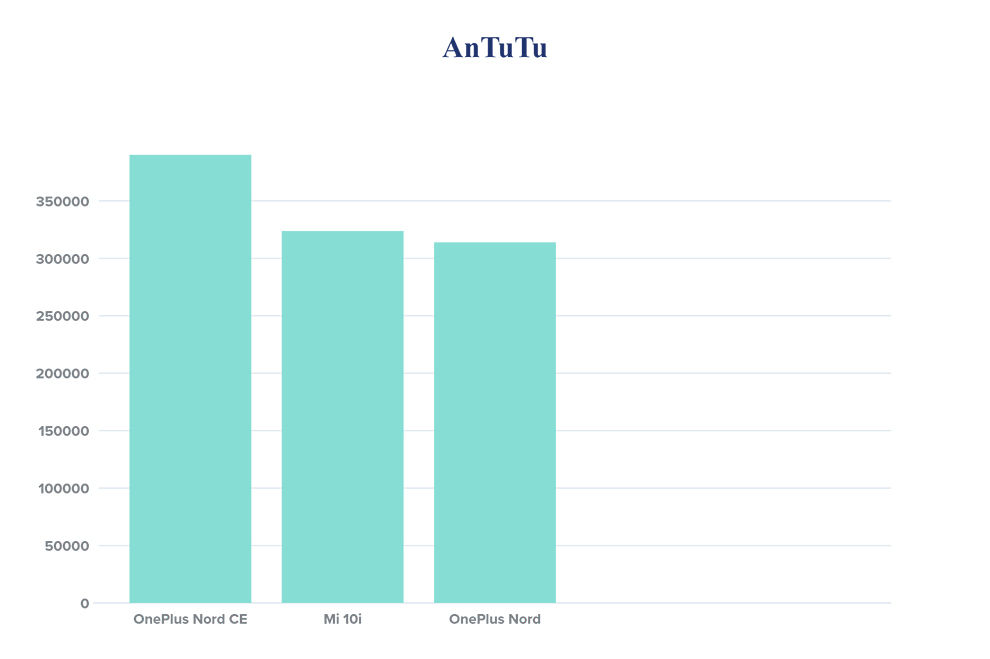 The third phone in the list, the Mi 10i, is powered by the same processor as the OnePlus Nord CE but skimps on RAM as it only offers 8GB of fast memory on the top-end variant of the device. In addition, this hardware is paired to Xiaomi’s MIUI, which offers a more bloated experience than the one being offered on the OxygenOS running OnePlus phones.

As we mentioned above, because of the presence of similar hardware, the three phones offer comparable performance in real-world scenarios, as they handle apps of daily use to heavy-duty games equally well. However, when you get to benchmarks, we start to see some difference emerge between the three phones.

For example, testing the three phones using AnTuTu, we realised it is the OnePLus Nord CE that is easily delivering the best results, as the phone clocked a total of 390044 points on the benchmark. Mi 10i, which also flaunts the same chipset, but lesser RAM, managed a score of 323755 points. The last on the list was the OnePlus Nord which scored 319717 points. 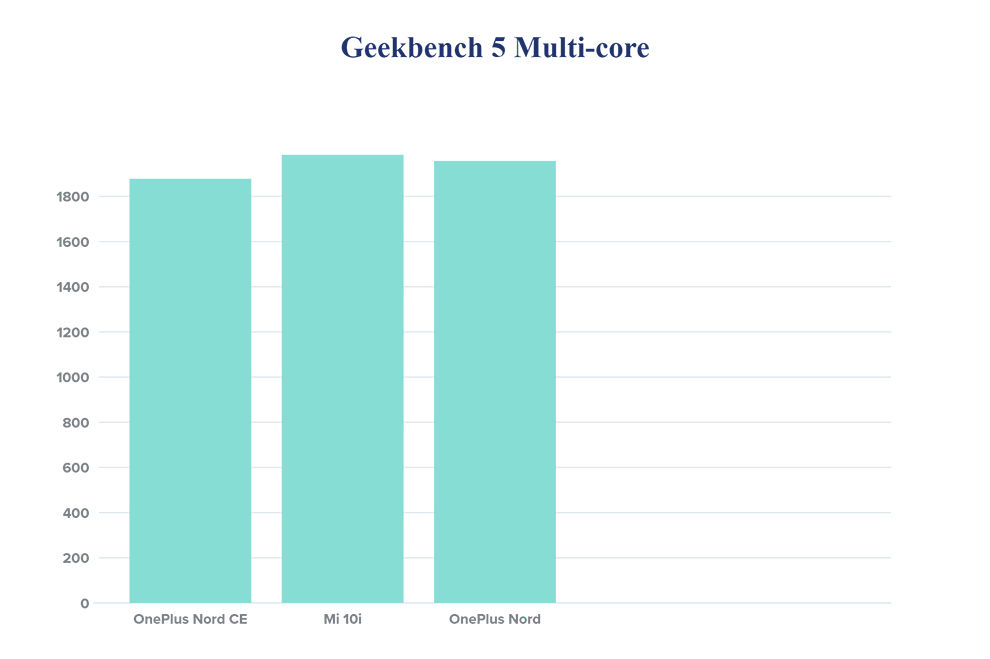 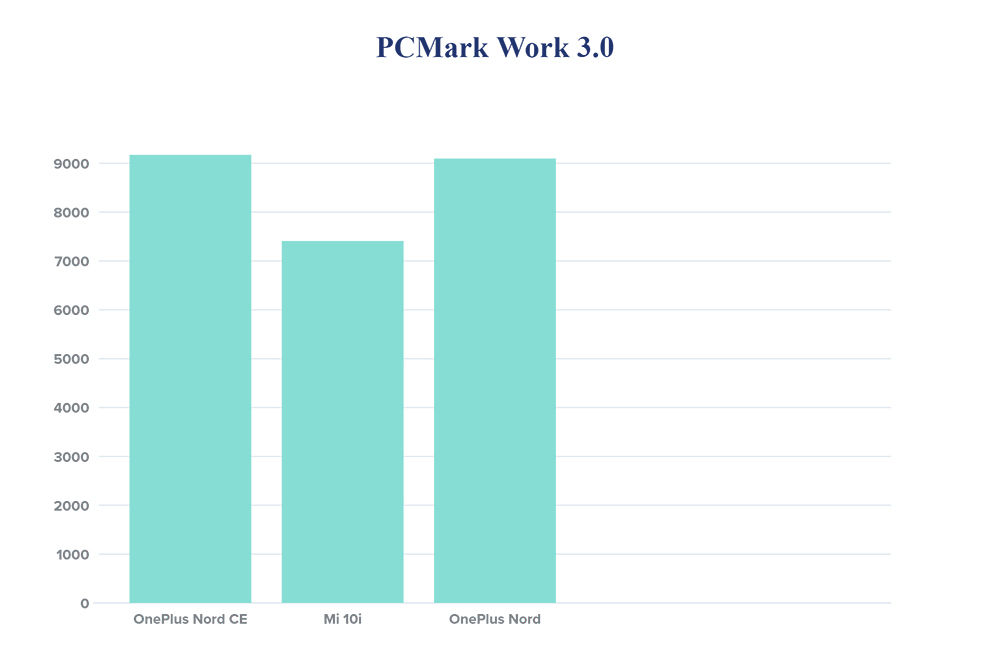 However, when we moved to Geekbench, we received conflicting results as the OnePlus Nord CE scored the least of the three devices in the benchmark’s multi-core test. Testing the GPU, the phone barely managed to beat the Mi 10i as it clocked 1109 points, compared to 1094 of the Xiaomi phone. Although, it lost by a margin to the OnePlus Nord, which scored an impressive 1661 points.

The results clearly showed that if it’s gaming that you’re after, then the OnePlus Nord is the best option in the list as it offers superior graphics performance to the other two phones. However, before you decide on the Nord as your next mid-range gaming monster, it’ll be prudent to also factor in the fact that the Nord is also the device with the smallest battery pack on the list. This is because its 4115mah battery pack is significantly smaller than the 4500mAh and 4850mAh battery packs of the Nord CE and Mi 10i, respectively.

When it comes to photography, the Mi 10i appears to be the most obvious choice of the lot as it offers a 108-megapixel primary lens, as opposed to 64-megapixel and 48-megapixel lenses on the OnePlus Nord CE and OnePlus Nord. In fact, the only real fight in this department is between the Mi 10i and OnepLus Nord, both of which offer powerful quad-lens set-ups that offer a lot of versatility because of both macro and ultra-wide lenses on them.

However, it is the Mi 10i that wins the race here because of the powerful primary lens that it comes packing. The Samsung HM2 sensor comes with 9-in-1 pixel binning, which offers extremely impressive and detailed shots, especially in the 108-megapixel mode. The lens captures plenty of rich detail but does have a habit of making compromises in terms of colour accuracy. 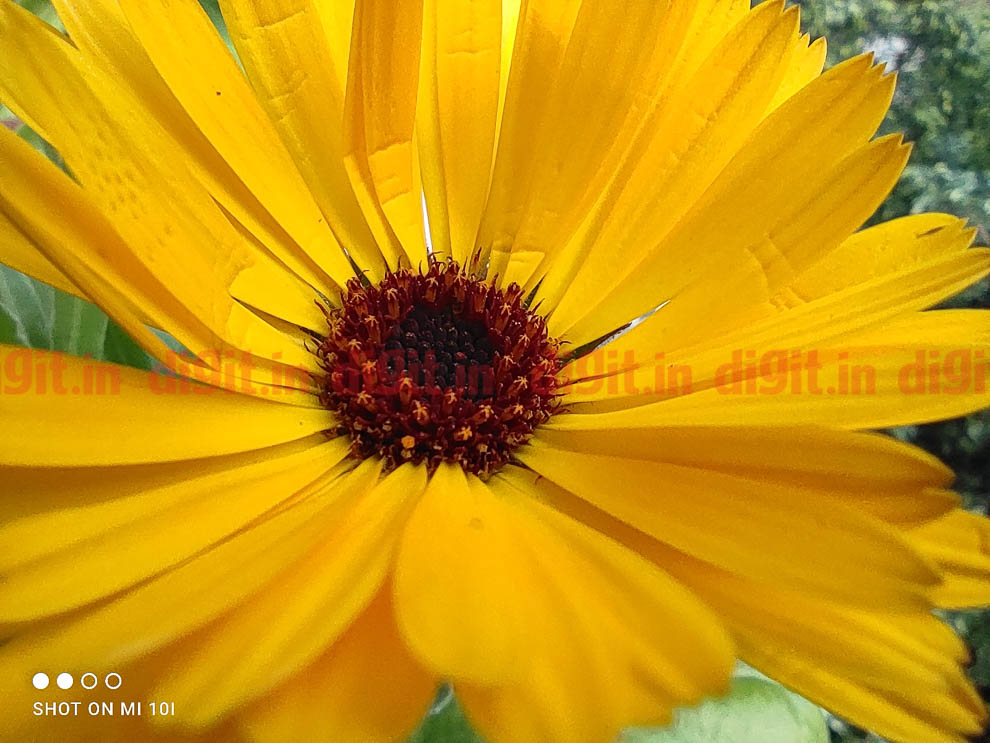 The low light performance of the device is good, as the phone can also salvage images from even extremely dark scenes by producing usable shots with good details, colours and brightness. It can also click good bokeh shots. The original Nord also offers good camera performance both in well-lit and low-light scenarios. It also offers fast shutter speed and OIS support for capturing blur-free shots that impress with colour accuracy and the level of detail. However, these images do seem lacking a little in comparison to the Mi 10i’s camera, which captures more details in shots because of its larger sensor. OnePlus Nord CE offers comparable performance to the Nord with its 64-megapixel lens. However, it does lose out to the other two devices as there’s no macro lens on the phone. 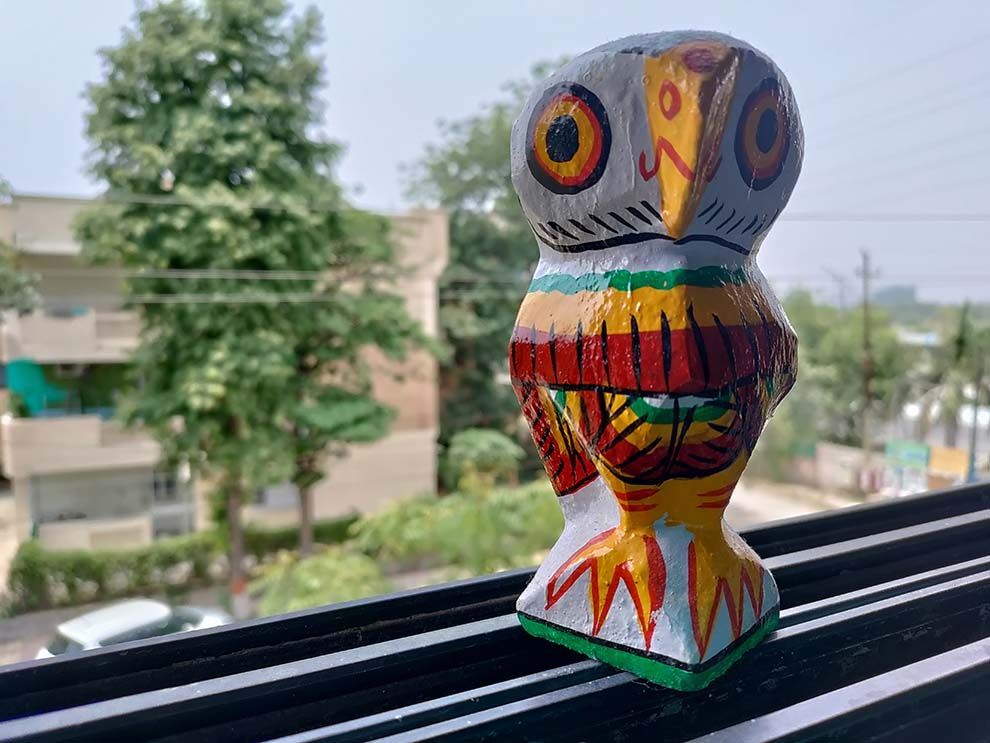 As we’ve explained above, the choice between the Mi 10i, the OnePlus Nord, and the OnePlus Nord CE is not easy. However, if you still need to come to a decision, it cannot be made without factoring in the pricing of the three devices.

Of the three, the most affordable phone is the Mi 10i which starts at an aggressive Rs 21,999 for the 6GB variant of the phone. The OnePlus Nord CE sits in between the two phones as it is available for a price of Rs 22,999 for its base variant. The most expensive of the three phones is the OnePlus Nord which starts retail at Rs 24,999.

Now, as we’ve already detailed above, all three phones offer their unique advantages, and as such, those should be considered while deciding on a phone between the three. But, if the price is the biggest consideration, then the choice definitely has to be between the OnePlus Nord CE and the Mi 10i, both of which are currently being offered at very aggressive price points.