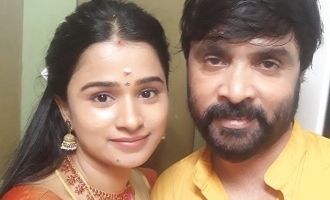 Kannika Ravi who started her career as a video jockey later acted in films such as ‘Theeya Velai Seiyanum Kumaru’ and also the serial ‘Amudha Oru Aacharya Kuri’ in the year 2012.  Her other notable films are ‘Adutha Saattai’ and ‘Devarattam’ and the serials

Kannika after several years of love got married to lyricist Snehan earlier this year.  The ceremony was headed by Kamal Haasan and Bharathiraja was also present among other celebrities.

The couple have been sharing their pics on social media and the latest one is of their first Vinayakar Chathurthi celebrations after marriage.  They have also posted a pic of their sweets offering to Lord Ganesha statue even as a Buddha statue is also present.