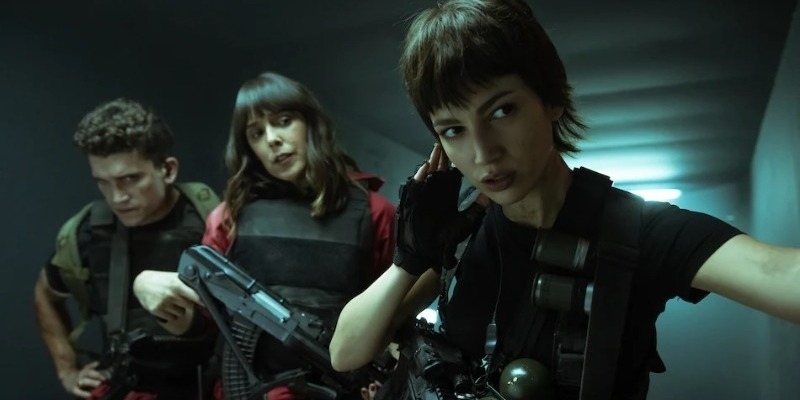 Who would’ve thought that a Spanish series would rule India making it one of the most anticipated releases of the year! La Casa De Papel aka Money Heist’s first volume of its final season is here and it has once again uplifted its fever after a disappointing last season. It’s gotten bigger and better this time with just one word everywhere. CHAOS!!

The last season ended on a thrilling point, where Alicia Sierra (Najwa Nimri) holds the Professor (Álvaro Morte) at gunpoint surprising him and us, the audience as well. The wait was hard! Well, is it all worth it? Absolutely YES! This season starts right where it left off with a small recap from Sierra’s perspective and unlike every time professor does not expect this and is caught surprised!

Right from the start to the very end, there is no one moment where you can take a breath as it is packed with adrenaline-inducing and nail-biting sequences. The pregnant yet sassy lady checkmates professor and his mates outside the bank, whereas the ones inside are still afresh with the wounds of Nairobi’s death, and amongst it all, there are also internal motives, ego clashes and to top it all there’s also a rebellion from the Hostages!

This two-way war becomes even more exciting when there’s the army trying to barge in and take down Miss Professor’s (Lisbon, Itziar Ituno) troops, with Professor being helpless. But this thought definitely would’ve crossed your mind, “Is this all a part of a bigger plan?” because this show has certainly shown us a pattern in its prior seasons of revealing it late with logic-defying twists. But hold up, this season is far from over!

Coming to the squad, this season offers a breakthrough for certain character arcs in a very unpredictable manner making us give a real goosebump-Esque reaction. Stockholm (Esther Acebo) has one of the best character developments this season, from an under-confident woman to the woman who can take a shot!

This season also stands out from the previous season on the viewpoint of strong women characters. Tokyo (Ursula Corbero), Lisbon & Stockholm are the brains of the heist and they do a pretty great job! Rio (Miguel Herrán) and Tokyo tease each other again and their chemistry is on point. Tokyo’s known for her rash and bold decisions but this time, it makes her a legend! (No spoilers, shh!)

The introduction of Berlin’s ( Pedro Alonso) son Rafael (Patrick Criado) is crazily good and their chemistry is even better! Their backstories make us miss Berlin even more and their combo certainly is the icing on the cake. But with the complexity of the situation and the over-load of new characters bringing on a fresh set of backstories and strategies which sort of making it complete chaos!

However, certain parts are predictable and have unnecessary suspense build-ups to them, but it is a part and parcel of every Money Heist season. The music and gripping screenplay are just outstanding with next-level cinematography and it ticks all the technical aspects (after all, this was expected).

However, on the whole, it was certainly worth the wait and does give us a dose of everything! It was no less than a rollercoaster of emotions and yes! now the wait becomes even harder. If there’s any series that can blow your mind, it’s this! So get ready to have a wonderful nail-biting weekend.