HTC One E9 plus detailed review

Before you start questioning the plastic used on the HTC One E9+, note that this has been a trend with HTC. The company has a flagship metal clad HTC One M9 Plus, while the E9 Plus is not only an inexpensive polycarbonate/plastic offering, but also its premier phablet for the year. The HTC One E9 Plus is not a case of mistaken identity, it is how the E series phones have always been. Don’t ask me why HTC made such a decision, but the fact of the matter is, the phone performs almost at par with its flagship sibling without costing as much. So, this phone is priced almost Rs. 10,000 lower than the HTC One M9 Plus and performs pretty much the same. This means the HTC One E9 Plus is, on paper, a bargain compared to the HTC One M9 Plus, but is it really so? I try to find out.

The One E series of phones have remained understated compared to the flagship One M series, and the story doesn’t change much here. As mentioned above, like the HTC One E8, the E9 Plus is HTC’s flagship hardware wrapped in a matte finish polycarbonate body. The E8 has matte on the front, while the E9 Plus reserves this for the back only. In this transition the phone does loose some design elements, like the curved back, which does hamper the ergonomics. Moreover, I believe the design of the One E9 Plus is closer to the more inexpensive HTC Desire series, which is a step back. This doesn’t mean that the design language on the Desire series is bad, it’s just that if I am spending more than 30K on a phone it should look a little bit more premium. The phone does try to create its own identity through the large camera module at the back, but the overall ‘Desire like’ look defeats the purpose. 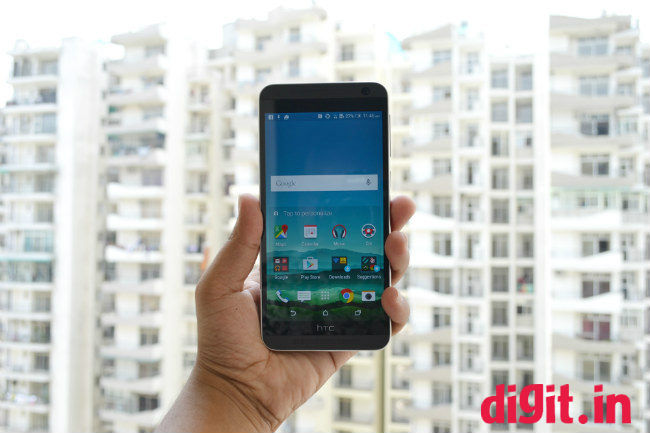 Moving on, I was a little unsure at first about the build quality, as I have reviewed other Desire phones like the HTC Desire 826 in the past, and wasn’t really happy with the build quality there. However, I have been using this phone for some time now and looks aside, the E9 Plus is at par with its previous iteration. Add to that, the fit and finish of components, the machine etched speaker grill and clicky button layout, and the phone retains some panache. Ultimately, the fact of the matter is whether it’s metal or just polycarbonate, HTC knows how to make a well built and sturdy smartphone. I have only two complaints, the lack of the signature curved back and the ludicrously large camera bump. 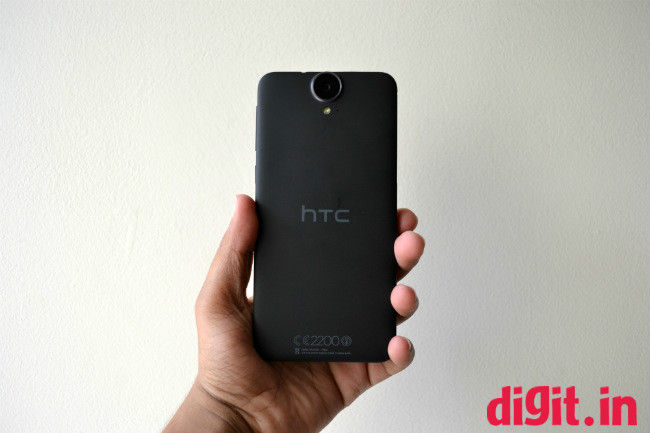 If you have read our HTC One M9 Plus review you would know about the UI already. There are slight changes in the security and camera settings since the One M9 Plus had a secondary camera at the back and the fingerprint scanner. But besides that everything is same old same old with Sense 7 UI on top of Android Lollipop. 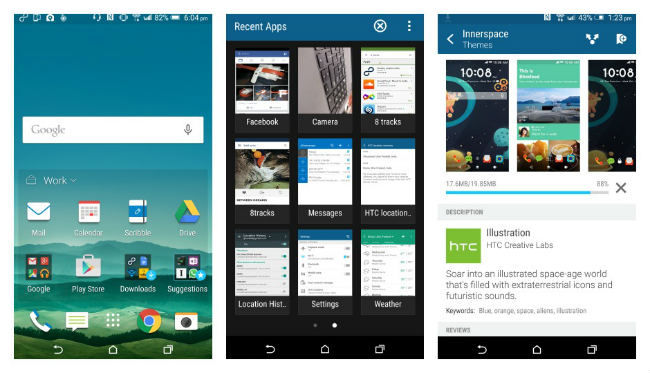 The display is however where the difference is evident between the M9 plus and the E9 Plus. While the M9 Plus’ display was good but had a definite pinkish hue to it, the display on the HTC One E9 Plus is almost perfect. The display is bright enough to be viewed in any light conditions, the sharpness is bang-on and the colour saturation is just right. Many of the current flagships offer a slightly saturated display, which is liked by many people. The HTC One E9 Plus does this too, but it’s just the right amount. 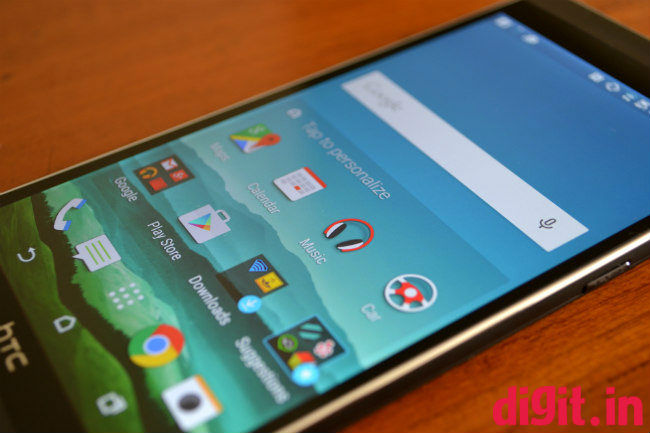 Performance is good but could have been better

The MediaTek Helio X10 slightly underclocked in the HTC One E9 Plus. So, how does it perform? Well, it is just below the HTC One M9 Plus. This has presumably been done deliberately by HTC so as to aid the HTC One M9+ in justifying its flagship status. Day to day performance is buttery smooth. In almost a week of usage I never closed down any app. All tasks, from browsing to heavy gaming were dealt with the same ease. However, the pixel shader of the GPU is not as good as I hoped for and far off objects either lose their texture or look completely of a single solid colour. Overall, the phone is very capable but nowadays phones under 30K can also run such tasks with equal ease. So, the HTC One E9 Plus has a tougher path ahead than last year’s HTC One E8.

Judging by the synthetic benchmarks and keeping the daily usage in mind, the MediaTek Helio X10 SoC is slightly underpowered when it comes to core performance and heavily underpowered when it comes to GPU prowess but nonetheless, still very powerful. Furthermore, the call quality and reception is good and the audio quality of the phone is one of the best I have heard, just like other HTC devices with Boomsound. 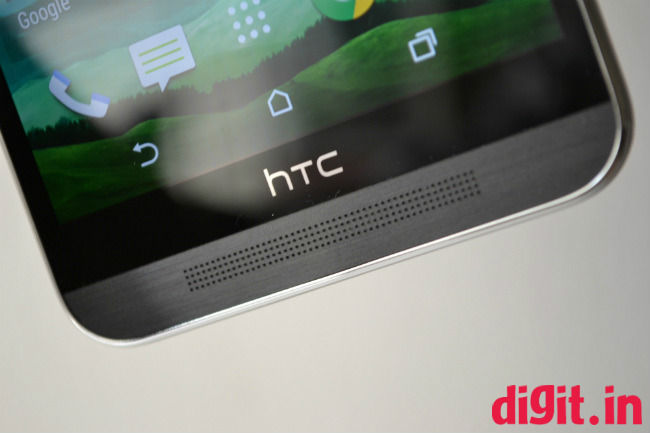 Battery does the job

Downclocking the SoC has also paid off for HTC in terms of battery life. While the phone does lose battery faster than usual when you’re gaming, it does well in regular moderate usage. With five to six calls, an hour of social media and some videos, the phone lasts for just over a day. That said, it’s not exactly optimised for video, since our looping video test yielded just about six and a half hours out of the battery. 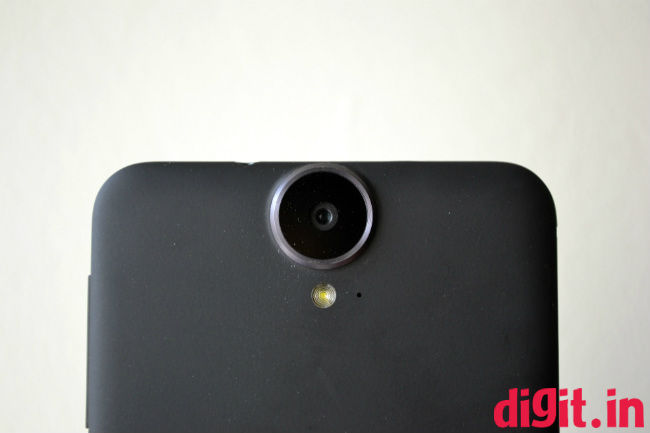 Coming to the Camera. Yes, it is a 20MP shooter and yes, it has been borrowed from the HTC One M9 Plus along with all its drawbacks. The camera lacks dynamic range and turning on the HDR mode doesn’t help much either. It struggles to focus while taking macro shots and leaves a light yellowish tint in every images it takes. Low-light photography also suffers due to slow focus and the lack of dynamic range. Images taken in day time or in ample light are average and I expected more from a 20MP camera.

The front-facing Ultrapixel camera is good, but I have seen better front-facing cameras in phones which cost half as much as this, the Mi4 for example. Like the M9 Plus, this one also softens images too aggressively, which some may like, but personally, I don’t.

HTC One E9 Plus

Being based on the HTC One M9 Plus, this phone doesn’t have very strong roots to start with, however, it does show promise in some aspects and lose out in some. But overall it does what it is meant to do, i.e, it is inexpensive compared to the M9 Plus. It’s actually a better phone than HTC’s current flagship.

That said, I won’t recommend the HTC One E9 Plus over say a Nexus 6, but I also won’t deny that the E9 Plus is a good contender in its price segment, just like its predecessor (HTC One E8) was.