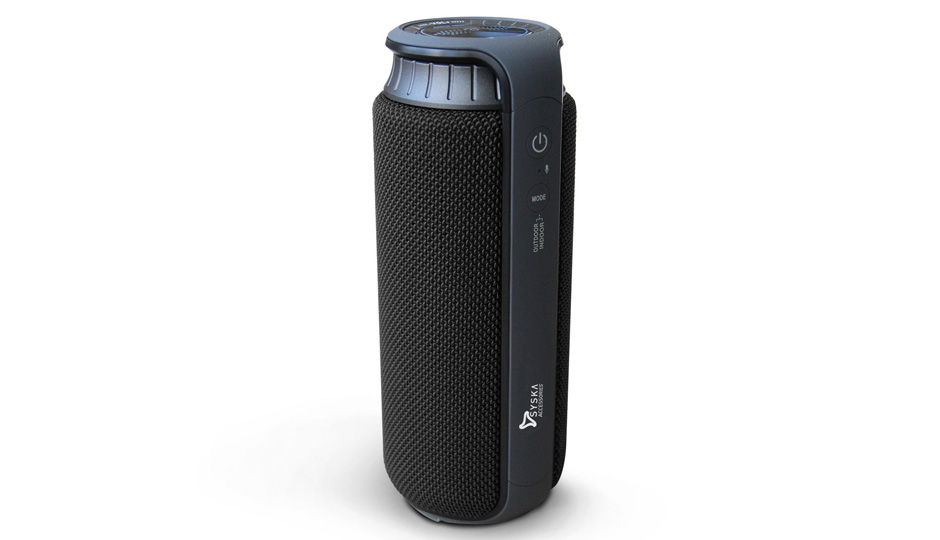 There’s a lot of things that can make or break a Bluetooth speaker, especially in the mid-range category. Once you’re paying upwards of Rs. 5000 for any Bluetooth speaker, you expect a certain number of things from it – great battery life, dependable connectivity, portability and durability, but most important of all, it should sound good. There’s a lot of competition in this price segment, with established players and new entrants duking it out. Syska, with its Sound Cup, is also trying to make a mark with a unique combination of features and performance. Let us find out how well it performed in our tests.

Right out of the box, the Sound Cup tells you one thing – it has nothing to do with a cup. The design looks like someone put an armour onto the JBL Flip range of products, which can be a bit misleading because you’re not supposed to use this one upright. Most of the plastic body is covered with a fabric mesh, but press onto it and the plastic beneath begins to creak, although not too audibly. The two strips connecting either face of the Sound Cup have a rubberised finish. On one face you have a touch interface which is used to control playback and track selection. The same face also has an analog volume dial under it, which is definitely a nice addition. There are also indicators for the mode (indoor/outdoor) on this face, an aspect which we will touch on later.

There’s something oddly confusing about the way different elements and text is placed on the speaker body. When you place the speaker on its rubberised feet, with the brand logo facing you, the text beside the Mode button is correctly aligned but the Mode button and power button are at right angles to you. Then, if you turn the touch-interface to face you, the Indoor-Outdoor indicators are upside down.

Even the logo on the subwoofer side doesn’t align perfectly with the placement. None of these will affect the speaker’s performance but create the feeling that the design could’ve been tested a bit more. On the other hand, the materials used don’t feel cheap at all and reflect proper attention to detail and ruggedness. The speaker even sports an IPX4 rating, protecting it from splashes. This ambiguity in the build loses the Sound Cup some points that could’ve been avoided easily.

In terms of connectivity, you get the usual Bluetooth as well as NFC, as well as Aux-in. This is where another bad design decision rears its head. The Aux-in port is at the bottom of the speaker, right between the rubber feet. So, if you connect an Aux-in wire, you would have to obstruct either of the faces or choose to block the speaker output itself.

The output of the Syska Sound Cup is definitely leaning towards the warm side of the sound spectrum. The overall 24W output doesn’t leave room for any complaints about the loudness, but there’s some amount of distortion at the maximum volume. Due to its design and the presence of a subwoofer, it did perform better on tracks like Hunter by Bjork and Uptown Funk. The bass sounds punchy, precise and doesn’t lose impact even on tracks where a lot is happening. There’s some degree of stereo separation as well, although almost negligible.

The same cannot be said for other aspects of the Sound Cup’s performance. On tracks with relatively low densities of instruments, the Sound Cup seems capable, but on more complex tracks like Selkies by BTBAM, the Sound Cup falters with the highs and the mids. There’s also a notable difference when you play high-res FLAC tracks versus default streaming via Spotify. We tested this out with Choti Si Asha from Roja, and the difference was observable. The vocals and the instruments seemed more spaced out with the high res track and being able to get that difference noticed at this price point speaks of the speaker’s capability. That being said, the same is way more evident in the competition like the UE Wonderboom.

Coming back to the audio performance, the two modes available mainly seem to differ in the way they handle different parts of the frequency spectrum. The indoor mode pushes out rumbling bass, whereas the outdoor mode boosts the mids and the highs in an attempt to sound better in open spaces. The calling performance on the Sound Cup leaves much room for improvement. We had to get really close to the speaker to make our voice legible to the listener on the other side. The connectivity on the Sound Cup is a bit dicey as well, as the speaker took really long to connect to a paired phone on a number of occasions. The fact that it keeps beeping while in an unpaired state doesn’t help its case.

The Sound Cup from Syska gets a lot of things just right, and that’s about it. The build, except for the confusing alignment of stuff, is quite solid and feels robust. You won’t find yourself worrying about accidentally dropping and breaking this too soon. The sound, on the other hand, is above average but not good enough to topple category leaders like the UE Wonderboom. It is quite easy to say that the Sound Cup is better than most of the budget options you can get, but then again, just how many budget Bluetooth speakers are you going to buy? If features like NFC, an analog volume dial, being able to switch between indoor and outdoor modes sound interesting and attractive to you, give the Syska Sound Cup a shot.