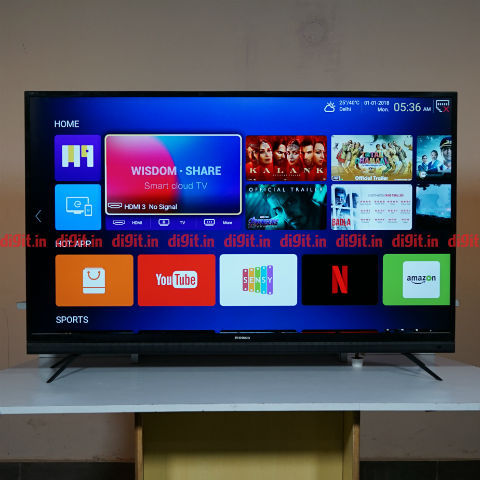 If you are looking for a 4K HDR TV on a tight budget of say, Rs 35,000 approx and looking for a big TV (in size), then you can consider the Shinco 55-inch S55QHDR10 4K HDR TV. Its picture performance for the asking price is really good, especially since the panel you get is a Samsung VA 10-bit panel with HDR 10 support and 55-inches! The smart features are bleak so you may want to spend an extra 6k and invest in the 4K Fire TV stick. Now that we’ve made your purchase decision easier, let’s dive into the review.

Kicking things off with the build of the Shinco 55-inch 4K TV, it isn’t the slimmest which is okay. You can argue that Mi TV smart TV 4 Pro is a really slim TV and while we agree with that, we say that the Shinco has direct backlighting resulting in better picture performance compared to the edge-lit Mi TV 4 Pro. We will talk more about that in the performance section. The TV has a plastic shell with glossy bezels that can get reflective under direct light. The bottom bezel of the TV is thick and that is because it has two 10W front-facing drivers. Most TVs have downward facing drivers and depending on your entertainment system or the table on which you keep the TV, the quality of sound will vary. Front facing speakers are slightly clearer in my opinion. Considering the price and the size of the TV, three of the borders are relatively slim and the logo at the bottom bezel is small and unobtrusive for the viewing experience. You can choose to either wall mount the TV or put it on a table top. We put the TV on a tabletop using the two feet that come in the box, which are also made of metal. The metal feet are extremely well built, hold the TV in place firmly and are quite slim. The space between the table and the bottom bezel is just enough to fit your gaming console. Considering the speaker at the bottom, you can place a soundbar comfortably without worrying about it covering any part of the display.

Overall, the build of the TV is sturdy, especially the table top stand that comes in the box. Its design is minimalistic. You also get the wall mounting brackets in the box. Considering the price of the TV, the build and design are good.

When it comes to connectivity, the Shinco 55-inch 4K TV has three HDMI ports of which HDMI 3 is ARC enabled. On the side, the TV has two USB ports, an SD card slot, 3.5mm port, the HDMI 3 port and an optical port. At the back, you have the antenna port, 2 HDMI ports, 2 AV ports and the ethernet port. The power cable is not user removable. On the right of the TV, you have the physical controls. If you want to use the keyboard feature on the remote control, you will have to use the supplied dongle which will take up one USB port, so keep that in mind. The TV supports Wi-Fi but sadly, no Bluetooth.

Once again we are happy with the selection of ports on the TV. There are ARC and 3.5mm for your audio options. There are 3 HDMI ports which at this price are enough and 2 RCA inputs for your old PS2 or DVD player or set-top-box.

The Shinco 55-inch 4K TV has a 10-bit VA panel that is made by Samsung. Thanks to the 10-bit panel, the TV boasts of 4K capabilities along with HDR 10 support. The panel has a brightness of 350 nits but in our testing, we found that the TV is ample bright for content consumption. Below we will highlight the performance of the TV using three types of content – 4K HDR, 1080p and gaming content.

For 4K HDR content, we played our standard slew of clips from Netflix which included DareDevil, Star Trek and more. The manufacturers tell us that the brightness of the TV is 350 nits which is a lot less than the requirement for HDR but is in line with what we’ve seen on other TVs in this price segment. The good news is that content is well viewable even in a lit room with the downside being that sequences in the dark seem dimmer than they should when watching HDR content. You can switch off the HDR playback via the settings of the TV to get SDR playback and that may help with some content in dimly lit situations.

We played DareDevil and Star Trek Discovery from Netflix. In DareDevil Season 2 Episode 3 the staircase fight sequence, we do get the dim and gritty feeling with the visual fidelity preserved. In some portions where the lighting is low, there is clear legibility of the action sequence. There are some sequences where we wish it were brighter, but it is still legible.

When it comes to Full HD content from sources like Netflix, Prime Videos, Hotstar and YouTube, the Shinco TV does a good job. It produces bright images that are easy to view even in a lit room. Shows like Young Sheldon and Big Bang theory that has bright situations exhibit good visibility on the panel.

Speaking of modes, be it for 4K HDR content or for Full HD content, you may want to stick with the dynamic or vivid preset as these two are the ones that give the best results. There is a ‘soft’ and ‘eco’ mode available as well but they reduce the backlight too much to have an enjoyable experience. One downside is that there are very few picture settings for you to tinker with manually in case you are one looking to set the picture yourself.

When it comes to gaming, we played Doom in 4K SDR. For indoors sequences, the visuals of the game look detailed and the grey and silver techie interiors mixed with the demonic presence is immersive. The outdoors look a little oversaturated and shifting from Dynamic to the standard preset helped with this.

For 4K HDR gaming, we turned to Gears of War 4. One good thing about Gears 4 is that the game has a built-in HDR slider along with a split screen mode to show you how content looks when HDR is on or off. Gears of War 4 looks detailed and immersive in HDR and there was no noticeable input lag. Another game with the HDR slider is Battlefield 1. Battlefield 1’s opening segment has a gritty war-torn environment and from the bangs of bullets to the muzzle flash in the game looks detailed and immersive.

Overall, gaming on the TV is fun. Considering the price and the size of the TV on offer, its gaming performance is impressive.

The Shinco 55-inch TV has 2 front firing speakers and it is possible that because of the front firing nature of the speakers, they sound clearer that what we have seen in this price segment. There is a clear channel shift when objects move from left to right or vice versa on screen. This is evident in motorcycle chase sequences or when a plane flies across the screen and during gaming when a firefight ensues.

When it comes to the output, however, there is a lot to be desired. Watch the Cyberpunk 2077 E3 2018 trailer on YouTube and you will notice that at less than 60 per cent volume, it sounds loud and room filling. However, there is a distinct lack of bass. Even attaching a budget soundbar like the Mi Soundbar improves the audio output. Audio from soap operas and TV shows like Young Sheldon or Big Bang Theory are loud clear and quite enjoyable. This is because such shows rely more on dialogue than a background score making them clear and easily audible on the TVs speakers. There are modes like ‘Standard’ and ‘Theatre’, and they work for watching the occasional movie but if an immersive experience is what you want, then you need to invest in a pair of external speakers like a soundbar. Having said that, the audio experience from the TV is better than what we have seen from TVs in this price range.

The Shinco 55-inch 4K TV runs on Android 7 out of the box but this isn’t an Android TV which is a bummer considering how much we like the picture performance of the TV. It is AOSP. We have reviewed a few AOSP TVs in the past with their own custom launcher and the UI experience has been acceptable with a frustrating streaming service experience natively. Apps like Netflix and Prime Videos are only able to run their mobile versions and not the proper Android TV version. This makes navigating the UI of the app more cumbersome and also reduces the quality of the content playback. The only app that worked flawlessly with the keyboard typing experience and navigation was YouTube.

Overall, the UI is the weakest aspect of the otherwise strong picture performance of the TV. To make the most of it, you should use it with a 4K capable streaming stick.

Place the Daiwa TV remote control and the Shinco TV remote control next to one another and if the logos were removed, you wouldn’t be able to tell one from the other. That is because the manufacturer of the TV is the same company. Just like the Daiwa TV, we reviewed, the Shinco remote control has functions on both sides. On one side you have a traditional remote control with functions like power, number pad, source, settings along with shortcuts for YouTube and Netflix. The other side of the remote is a full QWERTY keypad. This is extremely helpful when logging into services like Netflix or Prime Videos (the native apps on the TVs OS). As mentioned above, those services are the mobile version because the TV runs on AOSP so the login process can get quite cumbersome. The QWERTY layout of the remote control is a little wider than I’d like but that’s the compromise of having a 2-in-1 setup. The buttons are rubbery and require you to press them down with some force which is a good thing. This ensures you don’t accidentally press the wrong key when using the other side of the remote control.

Speaking of the other side, the traditional controls are easy to use with one hand and the buttons are equally rubbery and clicky as the other (QWERTY) side.

Overall, the remote control is functional and adds functions like a mouse pointer and the QWERTY keypad which really help in navigating the UI.

Like we said in the beginning, the TV has great picture performance for the price. Everyday content looks rich, gaming is fun and if you have a 4K capable streaming device, you can make the most of the TV. The front-facing speakers add to the audio experience from the TV. On the downside, the UI of the TV is frustrating and not worth delving into. It makes sense to invest in a streaming stick like the Fire TV. If you have a budget of about Rs 35,000 and are looking to pick up a large screen TV then you can consider the Shinco 55-inch TV. It is a value for money proposition for sure and gives the Xiaomi TV a run for its money as far as picture quality is concerned. For smart capabilities, however, it lacks behind what Xiaomi offers.