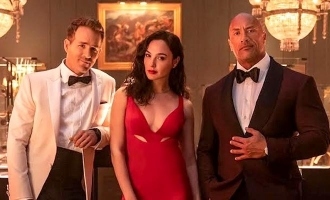 The first official trailer of Red Notice was unveiled by Netflix on their social media page a while ago. The trailer was fun-filled and high on the action as well. The premise seemed to be a three-way battle between the lead stars. The combo teams up, they deceive and they go one on one with each other amid a lot of guns and explosions.

The plot of Red Notice is that an Interpol-issued red notice on the two world’s most wanted criminals played by Gal Gadot and Ryan Reynolds. While red notice is a global alert to hunt and capture them, a daring heist brings together the criminals and the FBI’s top profiler ‘Agent John Hartley’ played by Dwayne Johnson.

With an estimated production budget of 160 million dollars to 200 million dollars, Red Notice is the most-costly movie in Netflix history. Steve Jablonsky is scoring music for this mega-budget Netflix original after collaborating with The Rock and director Rawson in Skyscraper. Red Notice is set to be released on Netflix on November 12, 2021.