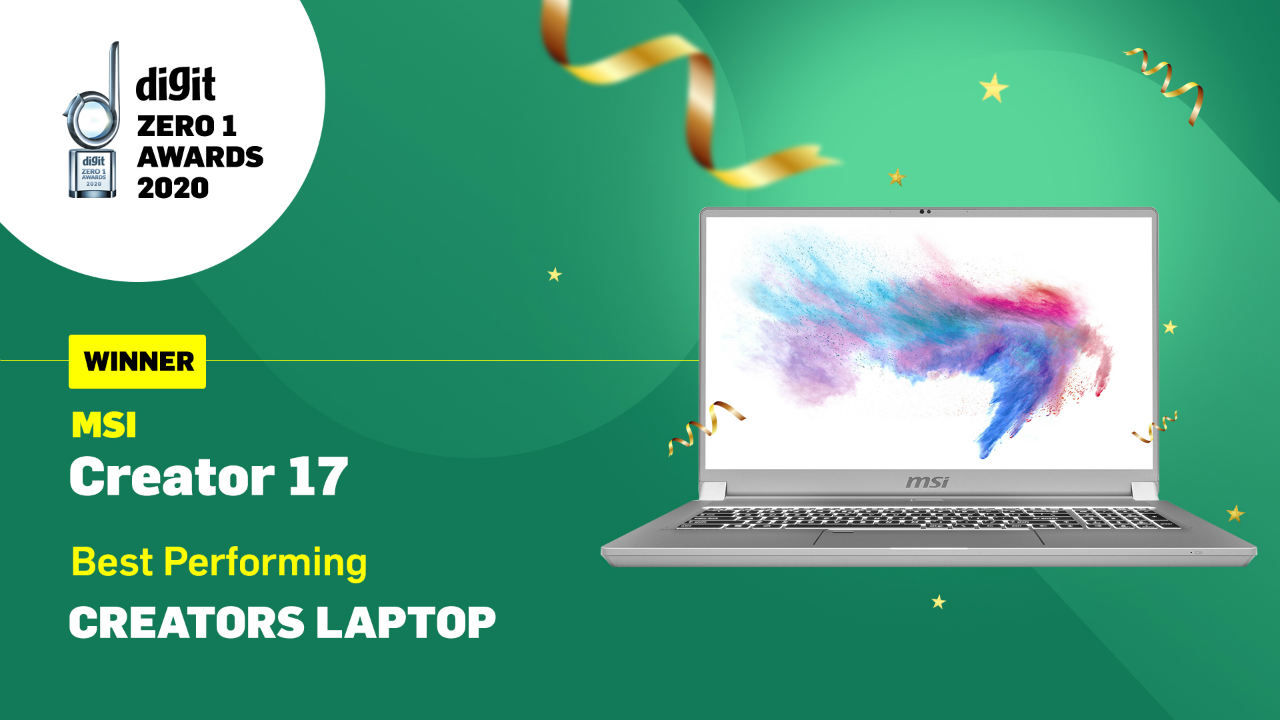 Over the last two years, laptop manufacturers have been fast recognising the demands of the content creator market. The response, in turn, has been phenomenal, with NVIDIA releasing Creator Drivers for those who want to use standard GeForce GPUs for their creative workloads. Laptops manufacturers fast adopted IPS technology for the display, with some of them even going so far as to get certification from colour calibration authorities such as X-rite and Pantone. While gaming laptops can double up as machines for content creators, this year saw some brands create dedicated product lines for them.

The MSI Creator 17 model we received was powered by the Intel Core i7-10875H, NVIDIA GeForce RTX 2080 Super, 64GB DDR memory and 2TB of NVMe storage. The laptop has a 17-inch Mini-LED display, an industry first. This panel, right out of the box, covers 100 percent of the sRGB colour space and 98 percent of the DCI-P3 gamut. Out of the box colour accuracy was very impressive, with a DeltaE value of just 1.85 (lower is better). The display clocked a peak brightness of 1000 nits as advertised, making it great for people wanting to get into HDR video production. Our test process incorporates and prioritises scores derived from the use of creative applications more than bench- marks. In terms of render completion whether its exporting 4K video or a 3D model in 3Ds Max, the MSI Creator 17 comes out ahead. Its closest tested competitor might be much cheaper, but the MSI Creator’s 17 incredibly colour-accurate Mini-LED display is one of a kind, and for now, worth the premium.

The Acer ConceptD 7Pro is another fascinating machine. Powered by the Intel Core i7-10875H processor, 32GB DDR4 memory and an NVIDIA GeForce Quadro RTX 5000 Max-Q with 16GB VRAM. The ConceptD 7Pro comes with a calibration report in the box, certifying that the panel was individually calibrated at the factory. Our unit’s calibration report put the DeltaE at 1.76. The Acer ConceptD 7Pro comes very close to matching the MSI Creator 17’s performance, falling only a few seconds behind in render times in almost all workloads. Where it lost considerably was the panel itself, which is limited to just 400nits of peak brightness as against the Creator 17’s 1000 nits. This makes colour-grading 10-bit HDR videos tricky. The Quadro GPU shines when using 3Ds Max and Maya, and has a faster render completion time compared to the Creator 17.

The XPS lineup quickly pivoted from being Dell’s in-house gaming brand to a premium brand, but the last few years didn’t see much growth in the XPS portfolio. Dell finally made changes to the XPS 15, positioning it squarely for creators with its 4K display and powerful components. Our test unit was powered by the Intel Core i7-10750H processor and an NVIDIA GeForce GTX 1650Ti GPU. Combined with 32GB of DDR4 memory and an ultra-fast 1TB NVMe drive, the XPS 15 is all about offering performance in a shockingly slim form-factor. While the XPS 15 doesn’t come close to matching the performance of the MSI Creator 17 or the Acer ConceptD 7Pro, the XPS still delivers on a speedy edit process when it comes to photo and video editing. The display has a DeltaE of 1.89, putting it in the exceptionally colour accurate range. The XPS 15 is still about 20-30 percent slower than our winner, but it’s thinner than anything else in the category, for a significantly lower price as well, which makes it a no-brainer for the Best Buy award for content creators.

With a legacy of 20 years, the Digit Zero 1 Awards is recognized as the Industry’s only performance-based awards. Digit rewards brands for putting in years of research in developing and introducing performance-driven products for their audience. All products are made to pass through a rigorous and scientific test process and compete with competitor brands in the same category. The Winner in each category is announced on the basis of their total score post complete performance analysis done across an average of 56 tests conducted for every category, across key performance parameters. The test process for the Zero1 Awards does not consider scores for features, price or design. The aim is to identify the very best products that money can buy, celebrate the innovations that push the industry forward, and reward the products that dare to disrupt the market.