Call of Duty: Warzone, Black Ops Cold War Getting Season 4 on June 17: All You Need to Know 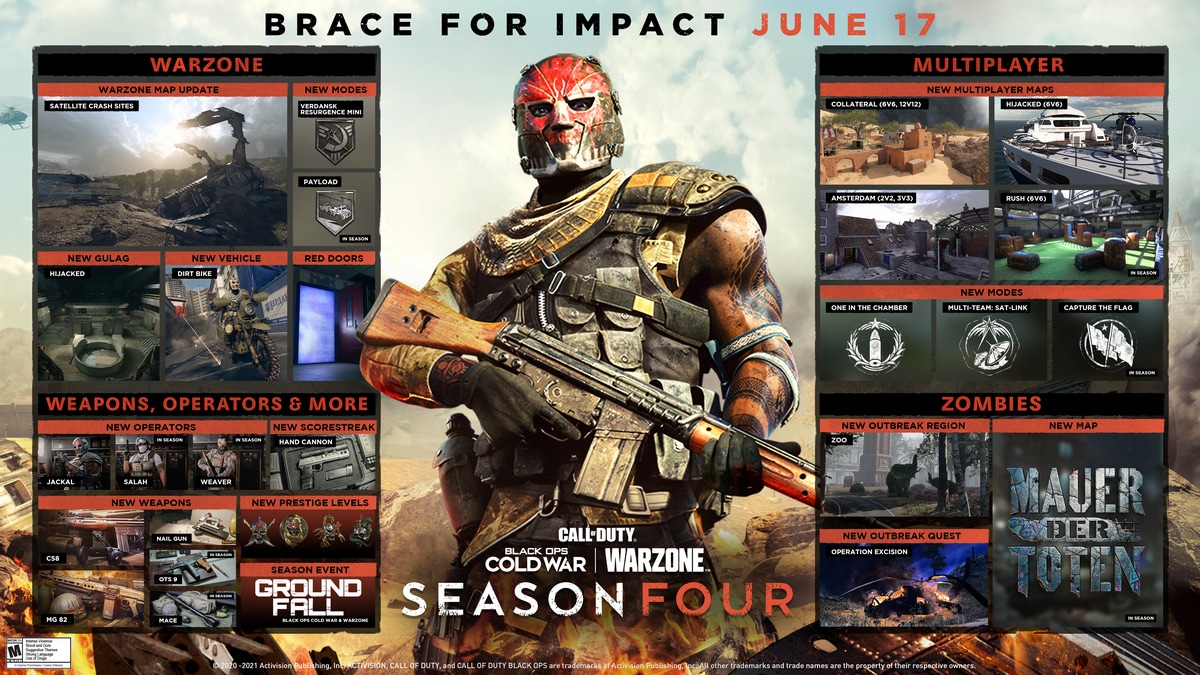 Season 4 will be available for players from June 17 after Call of Duty: Warzone is updated on June 16, 9pm PT and Call of Duty: Black Ops Cold War is updated on June 15, 9pm PT. The season will bring a new event called Ground Fall to both Warzone and Black Ops Cold War wherein players will have the chance to win exclusive rewards. Players will have to complete certain objectives to get items like Emblems, Calling Cards, and a Satellite Weapon Charm. Completing these challenges will reward players with an Epic secondary weapon blueprint.

Call of Duty: Warzone and Black Ops Cold War will get five new weapons in Season 4, two of which will part of the Battle Pass and three will be unlockable. These include the MG 82 LMG (Battle Pass Tier 15), C58 full-auto assault rifle (Battle Pass Tier 31), Nail Gun, OTs 9 SMG, and a mace melee weapon.

Call of Duty: Black Ops Cold War will get four multiplayer maps in Season 4 – Collateral (12v12), Collateral Strike (6v6), Amsterdam (2v2 and 3v3), Hijacked (6v6), and Rush (6v6). The new modes will include Multi-team: Sat-link wherein teams will have to keep their satellite online for as long as possible, One in the Chamber wherein players will start with one bullet and get one bullet with every kill. There will also be a Capture the Flag mode.

A new zombie experience will be coming to Call of Duty: Black Ops Cold War as well mid-season for which a new quest will be added at launch of Season 4. It will take place in the Outbreak region where players will find intel on zombies. The zombie event will be called ‘Mauer der Toten’ and will be set in a new map continuing the Dark Aether story.

Call of Duty: Warzone’s Verdansk map will get new points of interest including satellite crash sites, ‘The Red Doors’, hijacked Gulag, Downtown tower, and all of them will be available at the launch of Season 4. Warzone will also get a new Dirt Bike along with two new game modes – Resurgence Mini and Payload.