Bappi Lahiri’s Cameo In Masaba Masaba 2 “Will Be The Most Memorable One,” Writes Masaba Gupta

A throwback of Bappi Lahiri and Neena Gupta. (courtesy: neena_gupta)

Ahead of Masaba Masaba 2‘s release, the show’s star Masaba Gupta shared a throwback picture of the late singer-composer Bappi Lahiri along with her mom and veteran actress Neena Gupta on her Instagram stories on Tuesday. She wrote in her caption: “This season of the show has some very, very special cameos. But this one by Bappi Da will be the most memorable.” Bappi Lahiri died in a hospital in Mumbai in February this year at the age of 69. The Netflix series Masaba Masaba, is a semi-fictionalised show inspired by the lives of Masaba Gupta and her actress-mother Neena Gupta. The second season of the show will release soon in Netflix. Masaba Gupta is currently busy with the promotions of the second season of the smash hit. 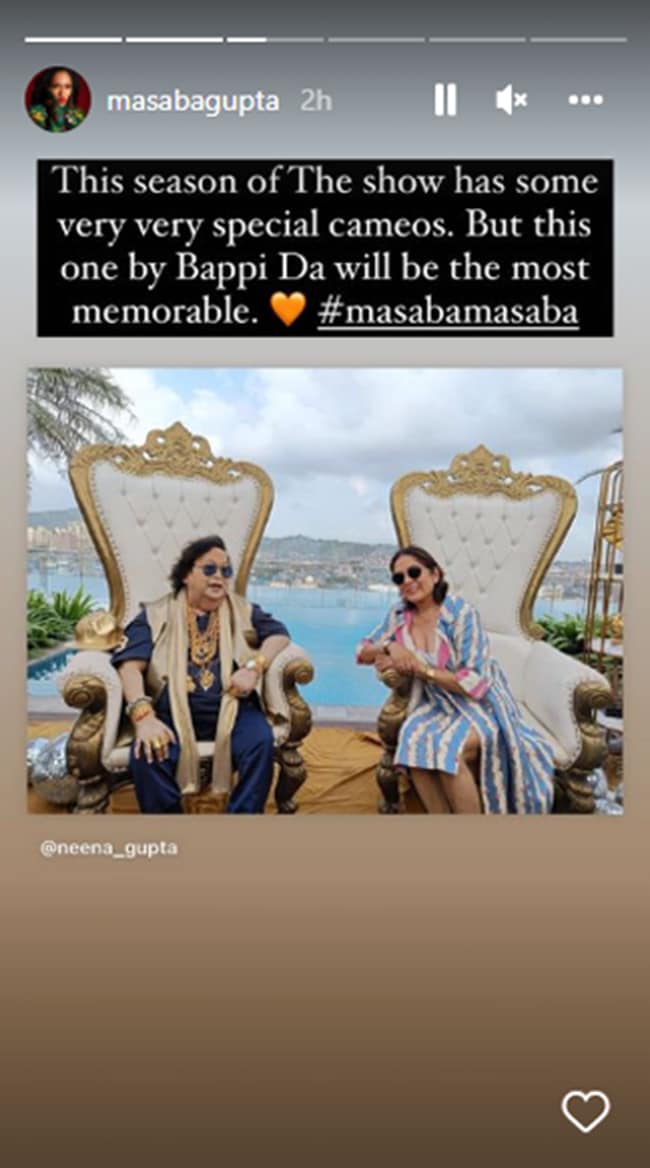 Bappi Da, as he was called fondly by fans, was best-known for his hit tracks such as I Am A Disco Dancer, Raat Baaki, Pag Ghoongroo, Bambai Se Aaya Mera Dost, Naino Main Sapna, TaakiTaaki, Humko Aaj Kal Hain Intezaar, to name a few.

His last Bollywood song was titled Bhankas, from the 2020 film Baaghi 3. In the recent years, Bappi Lahiri sang tracks like Bambai Nagariya from Taxi No 9211 (2006), Ooh La La from The Dirty Picture (2011) and Tune Maari Entriyaan from 2014 film Gunday.

Bappi Lahiri is survived by his wife, son Bappa and daughter Rema. Bappi Lahiri was best-known for delivering hits in several films of the late 1970s-80s like Chalte Chalte, Disco Dancer, and Sharaabi, to name a few. Last year, the veteran singer also made an appearance during an episode of the last season of the TV reality show Bigg Boss 15, where he arrived as a guest.