Actor Athiya Shetty and cricketer KL Rahul, who have been dating for over 3 years now, often feature on the list of trends courtesy the many rumours about their wedding. Over the last few months, there have been several reports about the wedding, reportedly scheduled to take place in 3 months. On Wednesday, Athiya Shetty reacted to the wedding rumours by sharing a caption on her Instagram story that read: “I hope I’m invited to the wedding that’s taking place in 3 months.” She signed off the post with a “Lol.” 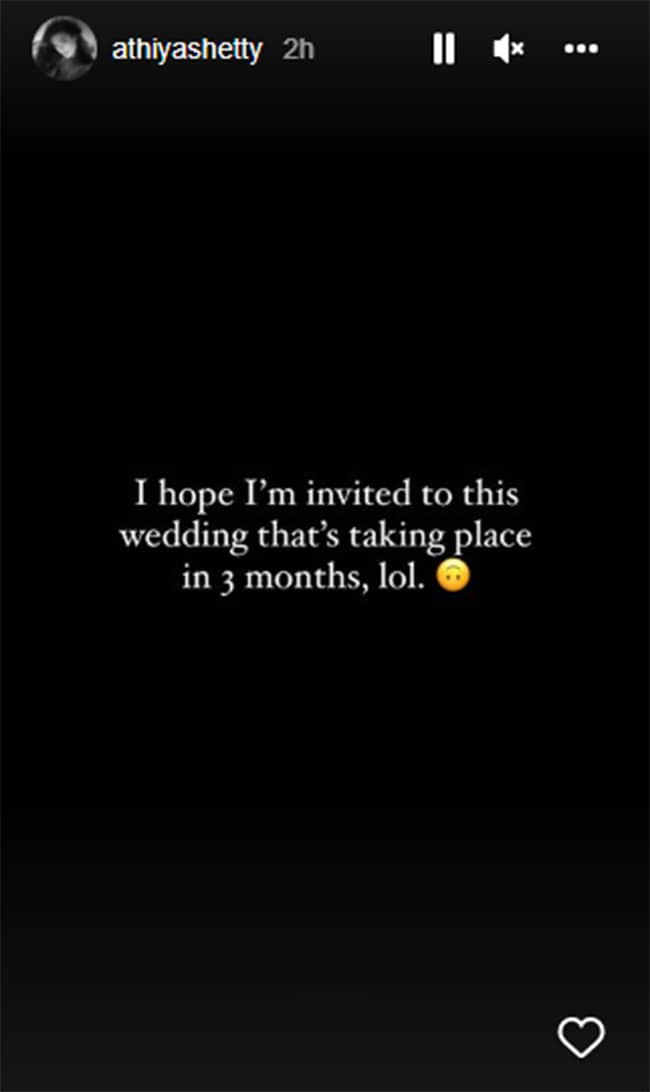 A few months ago, Athiya’s brother and actor Ahan Shetty spoke about the rumoured wedding in an interview with Dainik Bhaskar. The Tadap actor said, “As far as the wedding is concerned, there are no arrangements being made. There is no such ceremony, these are all rumours. When there is no wedding, how can we give you a date?”

Athiya Shetty and KL Rahul frequently feature on the trends list for their social media PDA and Instagram exchanges. Earlier this year, Athiya Shetty wished KL Rahul on his birthday by sharing mushy greyscale pictures with him on her Instagram profile. “Anywhere with you, happy birthday,” she captioned the post.

At an event earlier this year, Athiya’s dad and veteran actor Suniel Shetty told news agency PTI: “She is a daughter, she will get married sometime. I’d want my son also to get married. The sooner the better! But it’s their choice. As far as Rahul is concerned, I love the boy. It’s for them to decide what they want to do, because times have changed. I’d like them to take the decision. My blessings are always there.”

Athiya Shetty, daughter of Mana and Suniel Shetty, made her Bollywood debut with 2015 film Hero, co-starring Sooraj Pancholi, which was a box office debacle. She also featured in the comedy film Mubarakan and was last seen in the movie Motichoor Chaknachoor with Nawazuddin Siddiqui. The actress has not announced her upcoming projects as of now.

(With inputs from PTI)