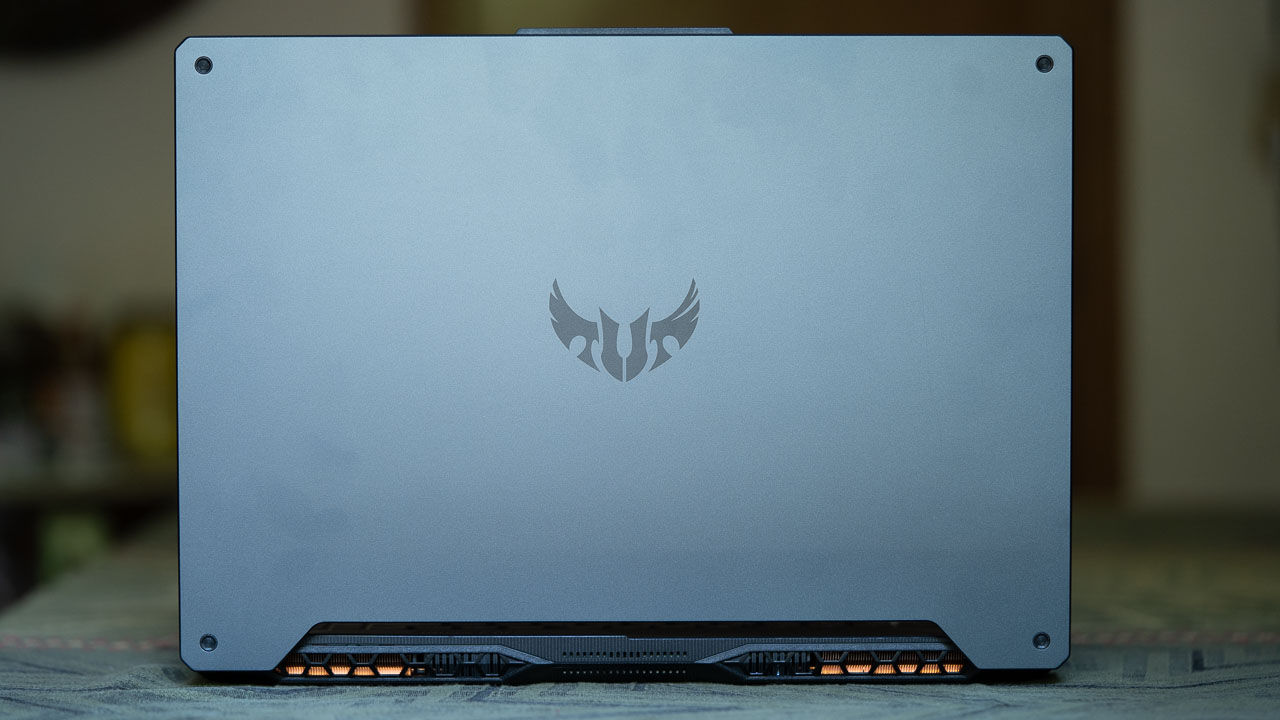 There has been a lot of excitement and anticipation surrounding the new 4000-series AMD Ryzen processors, and the Asus TUG Gaming A15 happens to be the first gaming laptop to launch in the country with one of them on board. The TUF Gaming A15 we have received for review is powered by the Ryzen 7 4800H, the Nvidia GeForce GTX 1660Ti, 16GB of DDR memory and ample amount of storage. Let’s see if this new machine is worthy of all the hype surrounding it.

Let’s get straight to the point. How does the Asus TUF Gaming A15 fair at its main purpose? Bloody damn good! The Ryzen 7 4800H and the Nvidia GeForce GTX 1660Ti are a formidable combination, pushing most modern titles well higher than the bare minimum of 60fps. We tested a number of popular games running at 1080p, at their High and Medium preset graphics settings. The average frame rates are in the chart below. 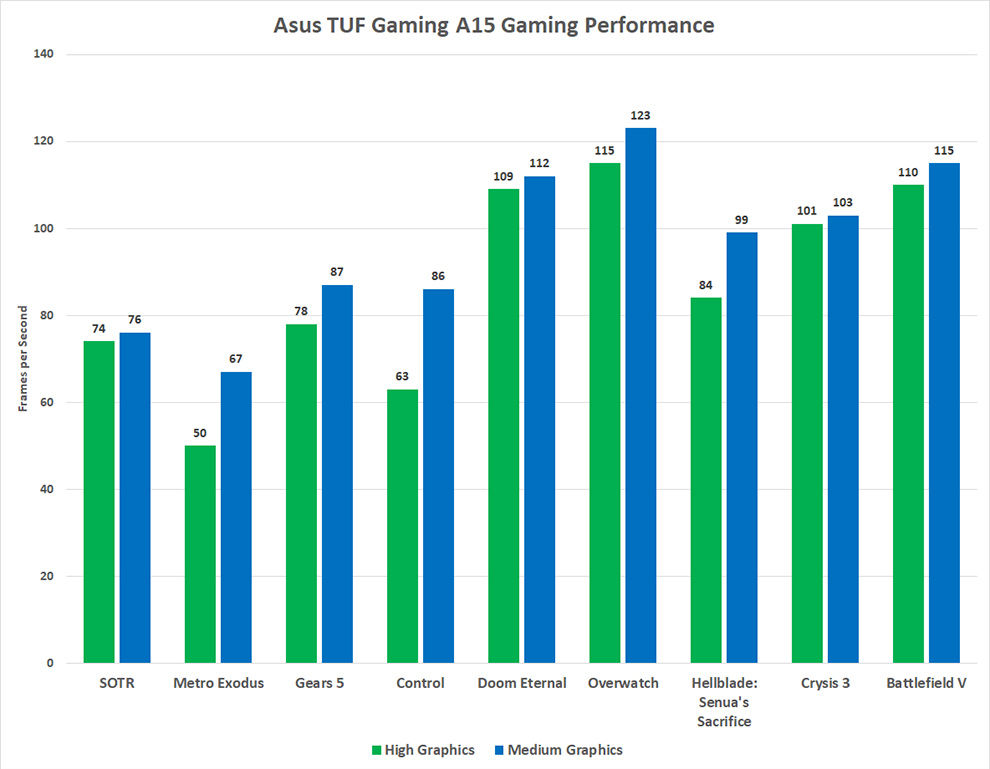 While testing out the gaming performance, we noted that the Nvidia GTX 1660Ti was mostly maxed out in its usage, while the CPU usage stayed around 60 per cent. This leads us to believe that if the Ryzen 7 4800H has enough headroom left that if it were to be paired with a higher-end GPU, say like the RTX 2060, users could get even higher frame rates out of this machine.

Creative professionals who could not afford the MacBook Pro would usually turn to gaming machines in order to meet the demands of their creative professions. It is only now that the OEMs are starting to realize the potential, and as such, are specifically tuning their gaming laptops to also double up as editing machines. Nvidia, to this end, has even created the Studio drivers for their GeForce GPUs so as to improve the performance of photo, video and 3D creation tools. We tested how long it would take for Adobe Lightroom Classic to export a batch of 50, 100, 250 and 500 RAW files that have been shot on a Nikon D800. We compared the export times with that of the Asus ROG Zephyrus G (GA502) powered by last year’s Ryzen 7 3750H. The numbers are shocking, to say the least. The Asus TUF Gaming A15 accomplishes all export tasks in practically HALF the time. 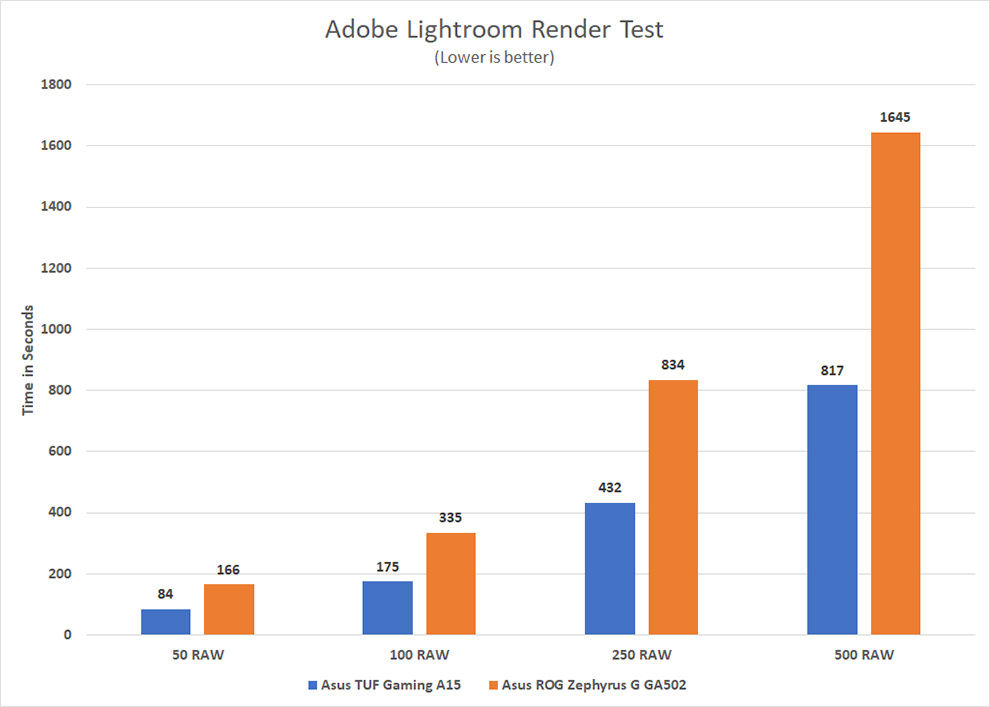 We ran a multitude of benchmarks on the Asus TUF Gaming A15 and once again, the new AMD Ryzen 7 4800H showed some significant performance jumps in comparison to not only the previous generation of AMD processors but also Intel’s chips on offer in this segment. Below are some of the benchmark results from our testing. We’ve already been left very impressed by the TUF Gaming A15’s gaming and editing prowess, so at this point, the benchmark numbers are just to hammer the point home. 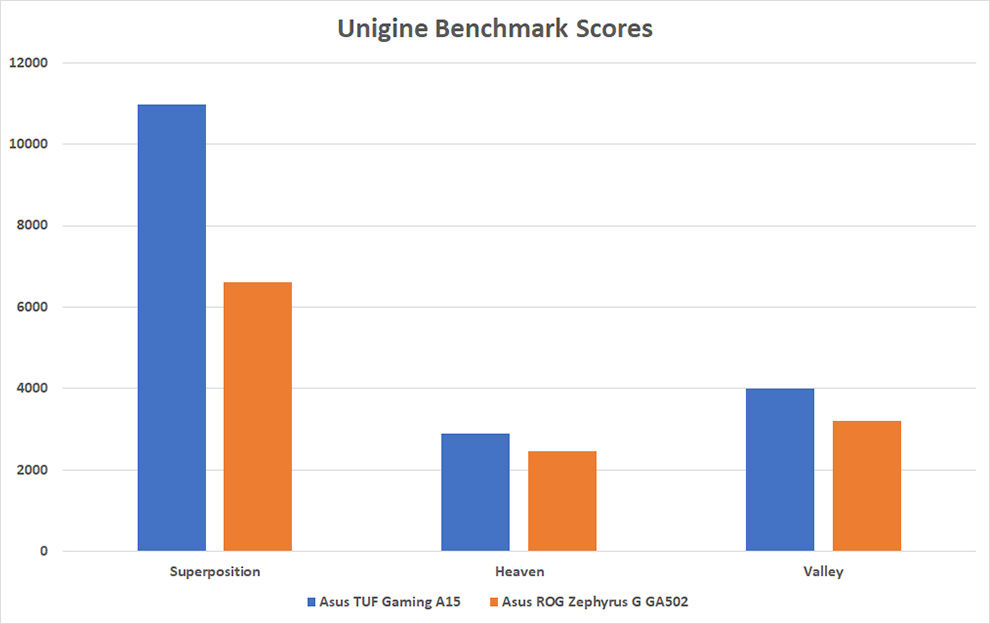 The display is a critical component of gaming machines and towards that end, Asus tries to deliver on as many parameters as possible. We get an IPS-level full HD monitor with a refresh rate of 144Hz and Adaptive Sync. On paper, this looks great, but in practice, things are a little different. While the monitor does manage to hit its advertised 144Hz refresh rate on the Blur Busters UFO test, however, we noticed that the response time wasn’t the fastest for the panel. While it wasn’t an issue for campaign modes across the games that we played, some gamers might find it to be problematic during competitive online gaming sessions. Content creators won’t be very happy either as the display is neither very bright nor capable of full sRGB colour reproduction. We noted a peak brightness of 294 lux using our lux meter, with good uniformity across the edges. The colour reproduction is also not the best, however, the viewing angles are signature of IPS displays. If your edit work does not involve colour sensitive work, then the display shouldn’t be a problem, but if you’re doing colour grading, then the display is going to be an absolute deal-breaker. 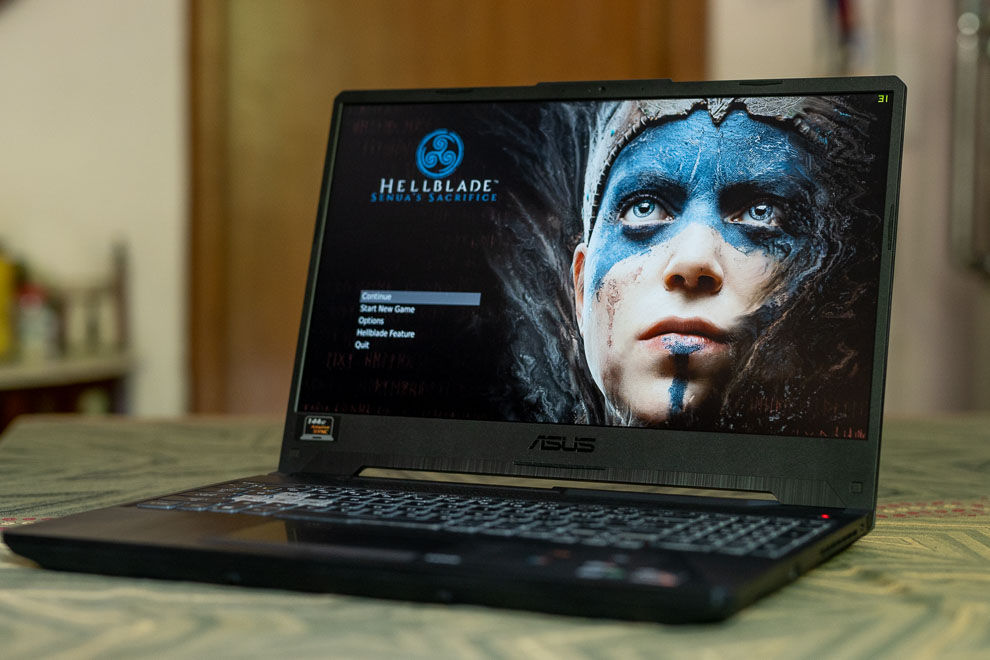 The Asus TUF Gaming A15 manages to pack a 48Whr battery into its chassis, and the new Ryzen 4000 series processors promise to be more forgiving on the battery life as well. We tested this using PCMark 10’s multiple battery benchmarks. In the gaming benchmark, the laptop lasted all of 45 minutes. The Modern Office test, which simulates battery life for everyday work showed an increased battery endurance of 2 hours and 48 minutes. We supplemented PCMark’s tests with one of our own. Using the laptop unplugged for a regular workday, the TUF Gaming A15 lasted two and a half hours, which is not bad by any metric.

The Asus TUF Gaming A15 packs a very tried and trusted keyboard and improves one of the biggest problems with the trackpad found on TUF series laptops of the past. The keyboard is practically the same as the one found on the Scar and Hero series of laptops. That means you get 1.8mm of travel and of course, RGB. The keyboard has a single-zone RGB configuration, although we would have preferred at least 4-zone RGB lighting. The arrow keys are a little on the smaller side and given how close they are placed to each other, they can be problematic to use while gaming. The WASD keys, on the other hand, are great. Asus has made the WASD keys semi-translucent which adds a nice visual touch, but a fan underneath the keys sucks in cold air, keeping the keys cool. This is a huge boon for gamers as most keyboards on gaming laptops tend to get blisteringly hot. 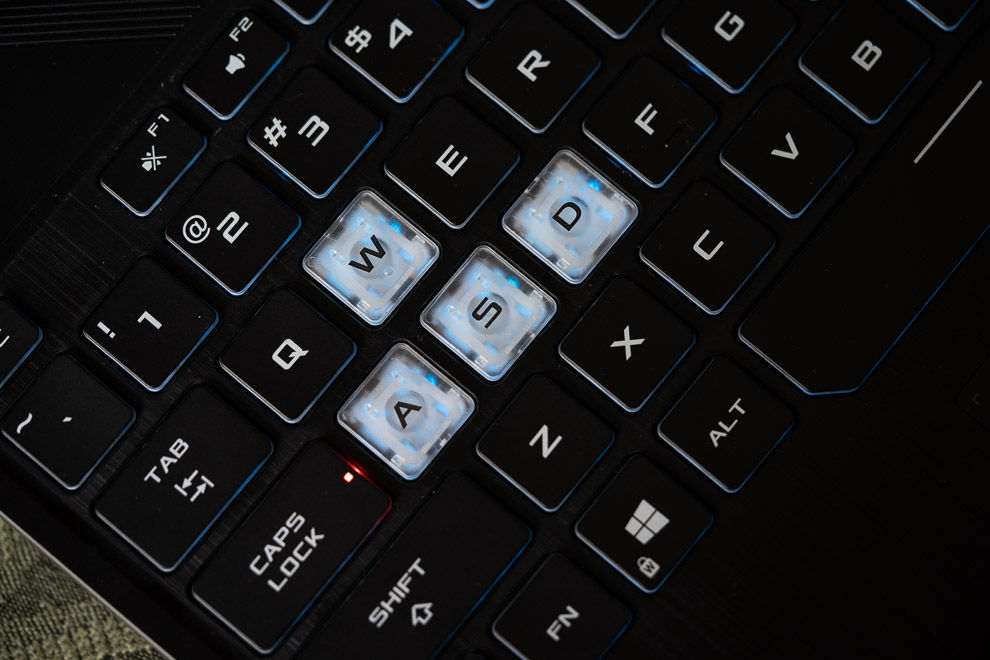 Moving onto the trackpad, you get a smooth surface to glide your fingers on, but the best part is that Asus has finally put individual buttons on the trackpad, which makes them both a lot more usable. While you may not be able to get headshots using a sniper rifle while playing on the trackpad, it is still usable for most gaming scenarios that don’t require pinpoint precision or high-speed movement.

Lastly, we’ve got a great selection of ports. On the right side is a singular USB 3.0 port while the left side houses the ethernet port, a full-sized HDMI port, two USB 3.0 ports and a Type-C port as well. Lastly, gamers also get a combined headphone/microphone 3.5mm jack. It’s nice that Asus has bundled all the ports on the left side, keeping the right clear so that your hand can move freely while using an external mouse. 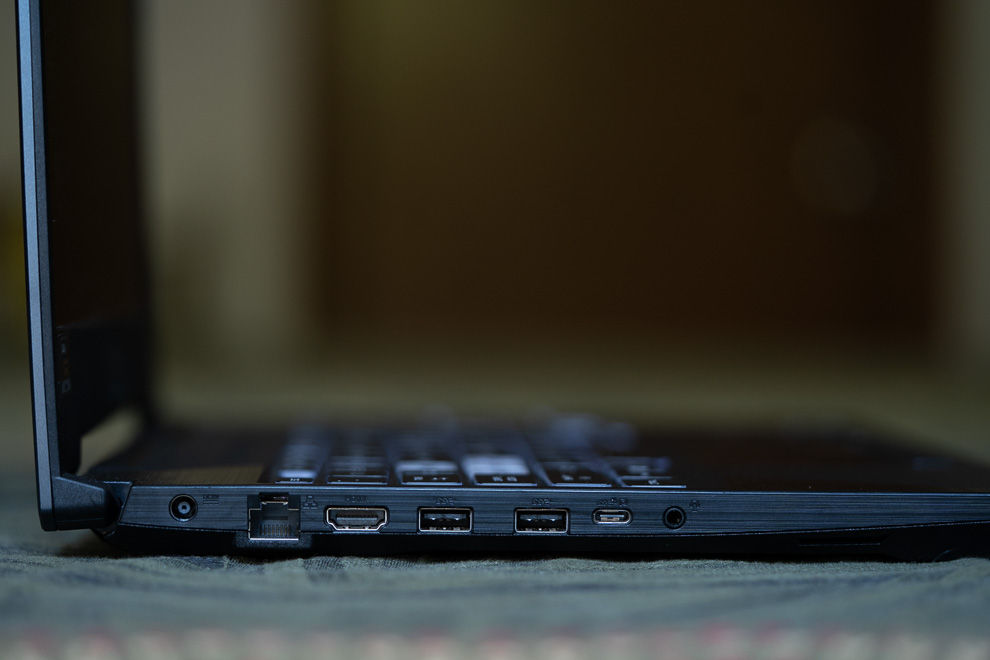 The Asus TUF Gaming A15 weighs 2.3 kilograms and measures less than an inch thick at its thinnest. It’s not a super thin or super light machine, but that’s because Asus has packed a LOT of copper into this thing. There’s plenty of copper pipes running over the CPU-GPU, but even the vents on the side and back have copper blocks for better heat exchange. The rear of the laptop almost looks like a sports car, with the bright copper peeking through the black grills. 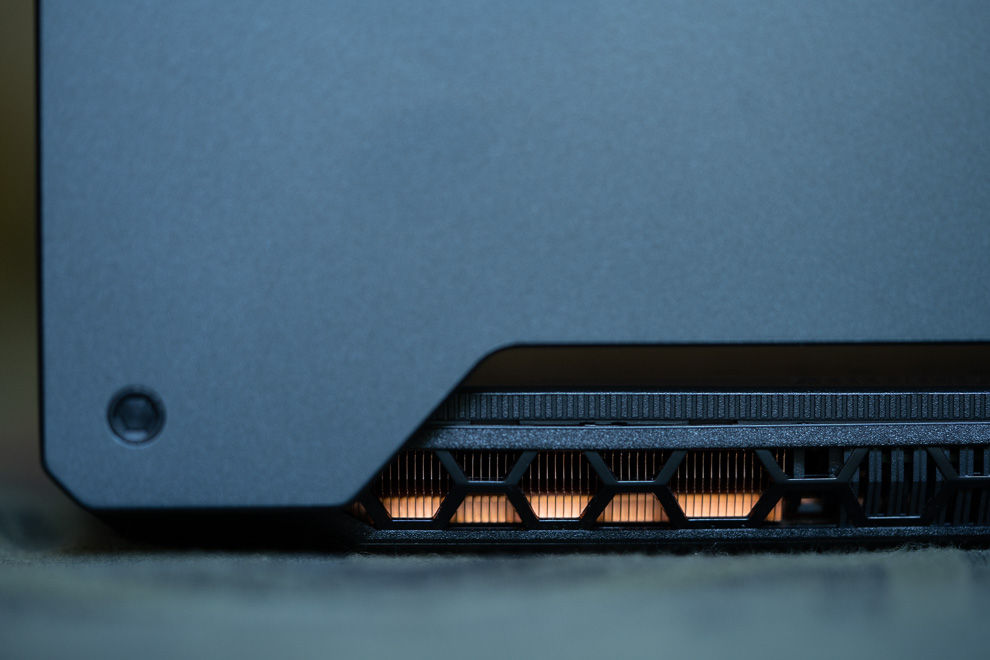 While the base of the laptop is extremely sturdy, the lid is where we found ourselves a little disappointed. There is way too much flex for anyone’s liking, and the hinge also has some play. We don’t expect the hinge to get any looser over time, but not having a wobbling display would have been nice.

I think this is the first of many moments of being impressed. The Asus TUF Gaming A15 is uplifted heavily by the AMD Ryzen 7 4800H and the Nvidia GeForce 1660Ti. The combination is perfect for anyone who is looking to elevate their gaming experience beyond the 60fps mark. The TUF Gaming A15 also makes for a great render station, capable of exporting massive amounts of RAW files in times faster than we’ve ever seen before in this price bracket and then some. We would not recommend using the machine for any kind of colour-sensitive editing due to its less than stellar colour accuracy. However, as a pure gaming machine, the Asus TUF Gaming A15 checks all the right boxes.