A fantastic TV for panel performance and smart capabilities 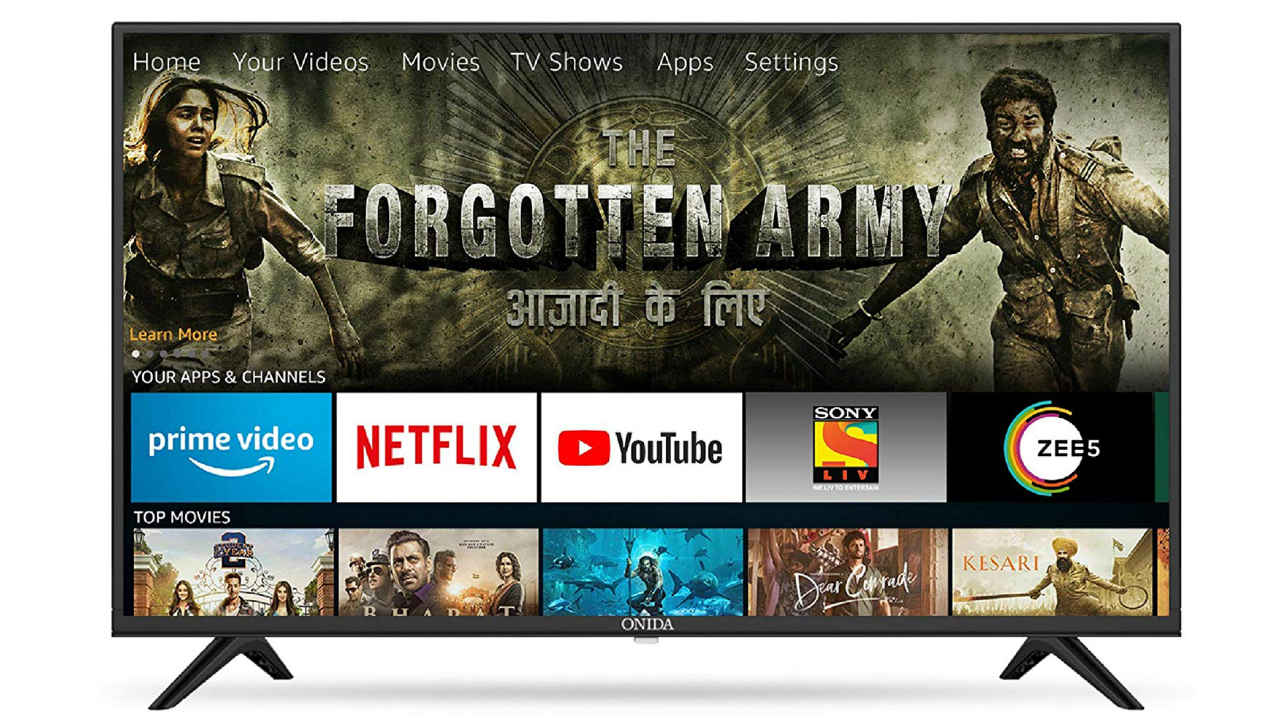 If someone is looking for a TV on a budget of Rs 20,000 to Rs 25,000 and is ok with the 43-inch screen size, there are a lot of options to choose from. We have TVs in this price available form Xiaomi, TCL, Cloudwakler, iFFALCON, Thompson and many more. Some of these TVs run on Android TV, others on AOSP. Even the ones on Android TV don’t necessarily support Prime Videos and Netflix in some cases. Today we have a TV from Onida. Yes, if you were a kid in the 1990s, then this brand name should immediately remind you of the devil that would appear in the Onida TV commercials. The brand is still alive and today we have with us the Onida 43-inch Full HD Smart IPS LED TV – Fire TV Edition. For the first time, we have a TV that comes with the Fire TV built into it. It also comes with an Alexa enabled voice remote control. Is it the best budget smart TV out there? Read on to find out.

KEY SPECIFICATIONS AT A GLANCE

Speaking of the design, the TV looks like any other TV we have seen in this price range and this screen size. It is simple, has a plastic shell and when kept on a table, stands on two ordinary plastic feet. The feet are outward-facing and hold the TV well in place. The outward-facing design of the TV’s feet gives you enough place to keep a soundbar or a gaming console, or set-top-box below it without hampering the viewing experience. Traditionally, the feet of the TV held the TV using two screws per foot. In the case of this TV, we have one screw per foot. At first, I thought this could lead to a stability issue but after having set up the TV I realized that it held the TV well in place.

The TV is surrounded by black plastic glossy borders, again, something we are very used to at this price point. One thing we aren’t used to is the fact that you don’t need to point the remote control at the IR receiver of the TV (apart from when you need to switch the TV on and off). The only other TV to do this is the Xiaomi TV and the fact that I can point the remote control in any direction and control the TV is a blessing. But more on that when we talk about the remote control. The build of the Onida TV is traditional and sturdy and the design would let it get lost in the crowd.

When it comes to connectivity, the Onida Fire TV Edition has 3 HDMI ports, 1 USB port, Optical, and headphones out on the side. HDMI 1 is ARC enabled. On the back, it has the ethernet port, composite in and antenna port. We would like to see 2 USB ports at this price point, but considering we are not recommending a streaming device like the Fire TV stick with this TV for obvious reasons, we’ll let the 1 USB port slide. The TV supports Bluetooth as well. Overall, we are happy with the connectivity options provided with the TV.

It truly is a treat to use this remote control. It is just like the Fire TV remote control, but it controls everything about your TV and brings with it hotkeys for services like Netflix, Prime Videos, Zee 5 and Sony Liv. Looking at this remote will definitely remind you of the Fire TV remote control. At the top, you have the power button below which rests above the voice button. You then have the back, home and a menu button below which rests the navigation buttons and the select buttons. Next up are playback controls below which we have the volume rocker mute button and a dedicated button to control your analogue (antenna) TV. Lastly, we have the OTT hotkeys. I wish the Zee5 and SonyLiv hotkeys were programmable to whatever OTT or app one wants. This would have made it quite the perfect remote control. Since I don’t use these 2 services personally, I’d repurpose them to Hotstar and YouTube. But then again, this is just me nitpicking at the remote control. Its functionality is superfluid when using the TV. The remote control is well built, easy to use and anyone that has used a Fire TV stick in the past will feel right at home here.

The Display Panel on the Onida TV Fire Edition is an IPS panel and has a 1080p resolution. The TV does not boast of HDR and honestly, it works well in the TVs favour as the picture quality overall is quite good. Let’s delve deeper.

Since the TV has a 1080p resolution, all the content we use as a part of our 4K testing is available in HD or FHD on this TV. So kicking things off with Altered Carbon, Season 1 Episode 7 the warehouse fight scene is one that has details better than what we have seen on budget HDR TVs. From the chinks and details in the protagonist’s armour to the brightness of the room, everything appears clear. Sure, we have some niggles with the contrast and saturation but changing the preset from Standard to Dynamic helped. Even in a show like the Grand Tour Season 1 Episode 1 where you have a lot of cars driving through the desert, there was really good colour reproduction and details in every scene. Even the skin tones look natural and detailed.

Even a show like Our Planet season 1 episode 1 the opening, where there is a lush forest with sun rays passing through the trees like God rays looks detailed and rich. Sure, the contrast isn’t what we have seen on some higher-end TVs but the fact that we are comparing this to a more expensive TV to explain its quality is a testament to how nice the picture looks. Even fast-paced content like Mission: Impossible’s fight sequences looks immersive on this TV. Thankfully, there is no artificial smoothing or a motion flow setting on the TV and the action in movies looks just like it should.

When it comes to gaming, the TV does have a dedicated game mode and switching to this does help reduce input lag a bit. We played some Assassins Creed Odyssey on this TV and the game looks nice. From the lush open world to the close-up combat and even the animation details of the characters were good enough to immerse us. We also played some Forza Horizon 4 on this TV and the winter weather looked chilly with white snow and the cockpit view from the Ferrari we were driving in the game had enough detail to make us feel it was a simulation. If gaming is something you will do using a PS4 or an Xbox One, then this TV should be fine for your needs. Overall, the picture quality of the TV is definitely worth considering. It has nice colour saturation, good details and enough control over the settings to get content to look just the way you like it.

Another thing to note is that if you want to change the picture or sound settings, there is no menu button on the remote control. You have to long-press the home button and only when you let go does a small menu popup on the bottom right of the screen to give you access to picture settings, sound settings, info and more.  This may not be something that is known upfront and it would have been nice if a settings button was present on the remote control itself.

Coming to smart services, you get an Alexa enabled remote control. You could press the voice button on the remote control and say things like “Play Stranger Things from Netflix” and the TV will launch the app, and start the show. You could also say things like “play the Cyberpunk trailer from YouTube” and it will give you the search result in the YouTube app. It is even possible for you to say “HDMI 2” and the TV will switch sources. If you have smart home appliances that work with Alexa, then you can control those as well. Overall, the UI is the strongest element of this TV and not only distinguishes itself from its peers but makes it a great TV for the cord-cutting generation that wants a great performing TV on a budget, as far as picture quality and UI is concerned.

If there is one place the TV lacks and lacks hard, it is with the audio output from the built-in speakers. It is appalling and is only acceptable for watching the news. Changing audio presets doesn’t change much and when you fire up a movie or a TV show, you are left wanting more. Thankfully, the TV supports Bluetooth, so you can literally connect a Bluetooth speaker or a pair of Bluetooth headphones to this TV to get a better audio experience. If you have a pair of speakers or a soundbar, you can connect it to the TV via 3.5mm cable or optical or ARC to get better audio output from the TV. As impressive as the TV is with its picture and UI, the audio performance is equally bad.

If it weren’t for the lacklustre audio performance of the TV I’d go all out and say this is one of the best TVs you can get in the 20k-25k price point. But if you can invest in speakers, then yes, for the features, UI and most importantly, the picture quality, this is a damn good TV. It has a smooth, easy to use UI, good picture quality and ample connectivity options. Where it lacks is with the audio. If you still have doubts in your mind about this TV, you can check out the Mi LED Smart TV 4X (43-inch) variant. We haven’t reviewed this Mi TV, but on paper, it is one of the few to give the Onida TV a run for its money.